Used cars not for suckers anymore

Used cars not for suckers anymore 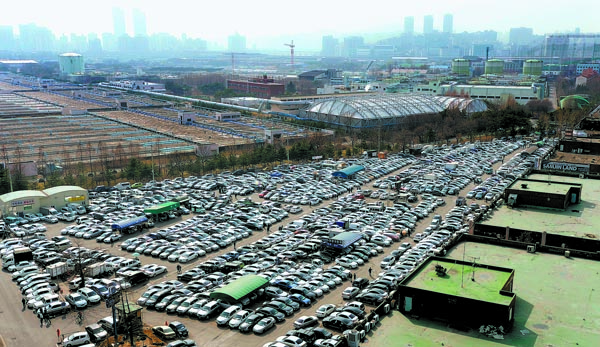 A major second hand car market in Janganpyeong, Seoul. The used car market has been changing from a trade in broken down lemons to better quality cars and well-managed trades. [JoongAng Ilbo]

The used car market in Korea used to be known as the “market for lemons.” It was considered the ultimate example of a market in which sellers knew more about a product than buyers to an unfair degree. It was a market selling lemons to suckers.

But the market is growing every year, showing a change in perception. And the nation’s major conglomerates, armed with strong brand power and customer service capabilities, want to develop it. Hyundai Glovis, an affiliate of the nation’s leading car maker Hyundai Motor, announced last week that it launched “Autobell,” a company established to purchase used cars from individuals. It said it will send an agent to customers’ homes when they need advice about selling a used car and will also stand in for customers at car auctions.

“Our goal is to become the most reliable brand in the used car market,” said Yoo Jong-soo, an executive of Hyundai Glovis. “We hope the company will provide good solutions for people worried about whether they can sell their used car at the right price.”

After establishing a business in the wholesale market, companies are moving into the retail market, reselling the used cars they purchased. Dongwha does that through its online used car auction market “Easy Auction” and AJ Rent a Car does it through “AJ Sell Car.”

“Sales are the key to the new car market, but in the used car market, it’s all about how you buy,” said Shin Geon-sik, a researcher from BS Investment and Securities. “Once you secure enough quantity, selling those used cars is a piece of cake.”

The reason major conglomerates are getting into the business is because it’s growing.

There were less than 2 million used car trades in 2009, but more than 3.3 million trades were made last year.

According to the Korea Consumer Agency, more than 100,000 people visit its offices every year for advice on used car purchases. It said people complain that they can’t good reference materials. In the United States, the Kelley Blue Book is a valuable reference work for American used car buyers as it provides the market value of every model and year.

Dealing with the tsunami of complaints about used car trades is the biggest challenge for Korean companies hoping to grow the industry. They need to study Carmax, the largest used car dealer in the U.S., which buys and sells more than 870,000 cars per year.

The company says its business strategy is to resolve all dissatisfactions that customers have had from any used car dealers.

Industry insiders said Hyundai Glovis, which carries an average of 140,000 car sales per year in the auction market could help customers get more transparent information if they successfully take on the used car purchasing business.

“The question is whether dealers of Hyundai Motor will welcome Glovis,” an industry spokesman said. “Traditionally, more than 40 percent of the used car trade was done by individuals at local dealerships. That means that Glovis will be taking away business from Hyundai dealers.”

Professor Kim Pil-soo from the department of Automotive Engineering at Daelim University said, “The distribution channel of the use car industry needs to be more transparent if it really wants to enlarge itself.”