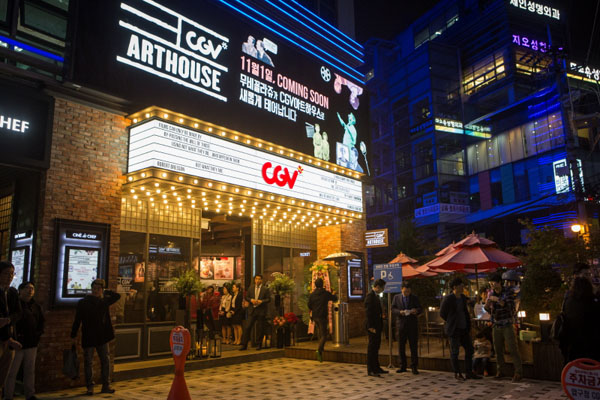 Starting from Nov. 1, CGV Movie Collage, the biggest distributor of art-house and indie films in Korea aims to revamp its image by changing its name to CGV Arthouse. The theater is run by CJ Entertainment. Provided by CGV Arthouse

From Nov. 1, CJ Entertainment’s CGV Movie Collage, the biggest arts cinema in Korea, is trying to revamp its image by changing its name to CGV Arthouse.

“We decided to change the brand name in order to approach the audience in an easier and wider way with art-house and independent films,” the company explained in a press release.

One of the multiplexes branches in Apgujeong-dong, southern Seoul, has opened a new screen that will be solely devoted to independent films made in Korea. It is reportedly the first attempt for a multiplex to dedicate a screen to independent Korean film in the nation’s history.

CGV Arthouse will select three to four independent films per month and will also screen movies from the past that are considered significant.

The company, which was initially established in 2004 with only three screens, has contributed a lot to the local non-mainstream film industry and now has 19 screens nationwide. Through its well-curated lineup and various promotional programs such as a “guest visit” section that invites renowned film critics or celebrities to talk about the artistic or cinematic quality of certain movies in front of an audience, stereotypes of indie films as being too niche or difficult to understand have faded.

“CGV Movie Collage or the Arthouse has done a lot for independent films by providing the opportunity to sell our movies to a wider audience range,” said Kim Jin-hee from Jin Jin Pictures, a local film distributor that mainly deals with independent films.

“They create a good program and promotional events so that indie films can get more attention from the public,” she added.

However, there are downsides to big companies dipping their toes into Korea’s vulnerable independent film ecosystem.

Critics point out that if large businesses start to promote and distribute indie films, movies they do not select will have a far lower chance of surviving in the market.

“What I feel bad about is that it gets pretty competitive when we compete to be selected by big companies,” said Kim.

“And if a certain film gets a low score at the cinema, it loses its spot very quickly.”

Although the ultimate result at the box office is very dependent on the quality of the film, conglomerates barging into the indie movie market pose a significant threat to the survival of much-neglected, non-commercial films.

“In addition to changing its brand name, I hope that it lives up to its initial objective of supporting independent films,” Kim Jeong-suk, the head of indie film distributor Indie Plug, told local media.