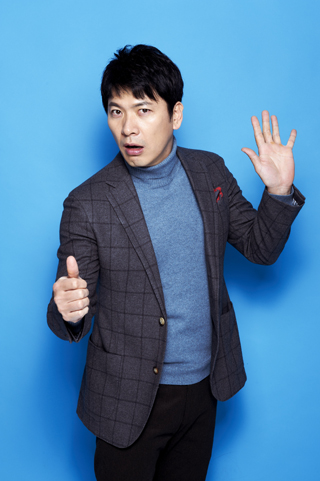 Since actor Kim Sang-kyung debuted in 1998, he has built up a solemn image for himself by acting in serious films like “Memories of Murder” and “May 18” as well as the drama series “King Sejong the Great.”

However, the 43-year-old actor has unexpectedly attempted to take a goofier route lately.

In the KBS weekend drama “What Happens to My Family,” which recently recorded an average viewership rating of 30 percent, Kim plays Tae-joo, a manager of a large company who is far from sharp.

And in soon-to-be-released film “Dad for Rent,” Kim plays libertine dad Tae-man, who has been supported by his wife for 10 years. No longer able to put up with him, his daughter makes him available for rent on an auction site so that he can cover fatherly duties for those who don’t have a dad. 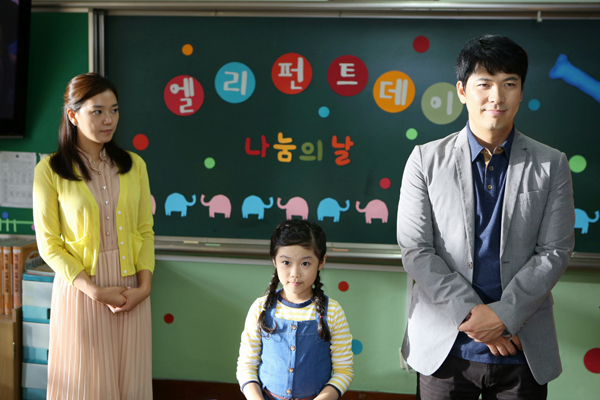 Kim Sang-kyung’s new film “Dad for Rent” emphasizes the goofy side of Kim as a libertine dad. [JoongAng Ilbo]

Having gone through a similar renaissance on both the small and silver screen, Kim said in a recent interview with the JoongAng Ilbo, an affiliate of the Korea JoongAng Daily, that he feels “a sense of freedom.”

Q. Why haven’t you shown your funny side until now?

A. I have always been a delightful person when shooting films or dramas, but that hasn’t been shown on screen until now. It feels like I’ve taken out my favorite clothes after hiding them in the closet for a long time. I met up with a camera director who worked with me on “King Sejong” and he said, “This is the real you.” My wife recently told me “You’re a national cutie” while showing a comment [about me] on the Internet. It’s really funny to hear that kind of thing at this age.

How do you feel about your role in the film “Dad for Rent”?

I was worried that viewers would not warm up to my new image, but since the drama, viewers have received my new character well and the awkwardness [I felt about] my film character subsided a little.

What made you choose the movie?

When I pick a script, I see if it moves me. In “Dad for Rent,” there were points that pulled at my heartstrings, such as the scene where I play the role of a son for dementia patients.

It seems like a realistic story - a dad being rented out by other people. What did you think about it?

At first I thought the concept was solely intended for comedy, but there is a sense of realism in it. One time, I visited an orphanage to shoot a scene where I act as a father to orphaned children. I bumped into some of the children who lived there and none could look me in the eye, as if they were some kind of criminals. I felt really bad about it and realized that there are a lot of people who are in need of fathers.

Was it difficult trying out some new facial expressions?

Watching some of my most ridiculous and pathetic faces, I feel kind of a thrill. It’s like finding a new self.

Next year you have a new thriller coming up, “The Deal.” Can you tell us a little bit about that?

I appear as a detective, which is my third time playing such a character. In order to show a lapse of time in the film, I lost 10 kilograms [around 22 pounds] in 10 days.

Do you keep in contact with director Hong Sang-soo?

I met him when he was premiering “Hill of Freedom” just a little while ago. I suggested that we should make a movie that would win us prizes at the Cannes Film Festival. Actors like Yu Jun-sang and Lee Sun-kyun frequently appear in his films, but I am the only one who has been identified as a “persona” of Hong until now [laughs].