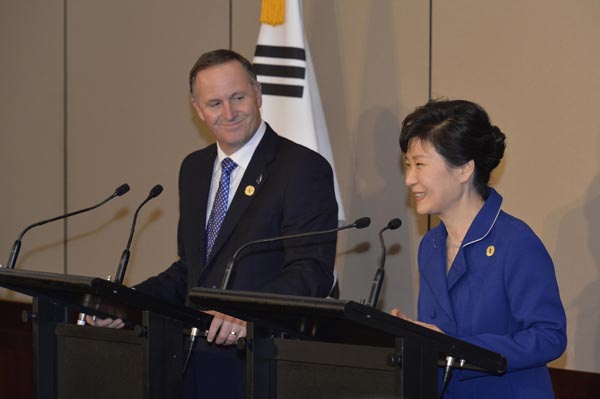 President Park Geun-hye and New Zealand Prime Minister John Key deliver a joint statement on a free trade pact at a hotel in Brisbane, Australia on Saturday on the sidelines of the G-20 summit. [NEWSIS]

Just one week after the conclusion of a bilateral trade pact with China, President Park Geun-hye has announced that Korea sealed a free trade agreement (FTA) with New Zealand.

Park made the announcement with New Zealand Prime Minister John Key in a joint news conference in Brisbane, Australia on Saturday, on the sidelines of a Group of 20 leaders’ summit, concluding the bilateral trade accord 65 months after negotiations first kicked off.

Through the deal, New Zealand will abolish all tariffs on over 7,200 Korean goods over the next seven years.

New Zealand will also extend working holiday and student exchange programs with Korea. This includes issuing 3,000 working holiday visas per year for Korean youths from 18 to 30 years old, up from the current 1,800.

When the agreement takes effect, Korea will lift tariffs on 48 percent of New Zealand’s exports.

Korea will especially look forward to a boost in its exports of tires and freight cars to New Zealand, which it currently imposes a 5 percent tax upon.

Last year, a total of $45 million worth of tires and freight cars were exported to New Zealand, around 3 percent of total Korean exports to the country, or $1.491 billion.

Likewise, Korea imported $114 million of New Zealand beef last year, which amounts to 8 percent of its total beef imports. Measures on imports of New Zealand’s beef will be more stringent than with the Korea-U.S. FTA.

New Zealand will lift tariffs on Korean tires, washing machines and ramen immediately, while tariffs on refrigerators, heavy construction equipment and freight cars will be lifted three years after the FTA takes effect.

Rice, garlic, chili and onions and other sensitive agricultural produce to Korea will be excluded from tariff lifting. But a tax on frozen garlic will be lifted after 18 years.

Taxes on kiwis will be abolished over the next six years.

Bilateral trade between the countries came to around $2.8 billion last year.

Both countries will have to ratify the deal in their parliaments before it takes effect.

This deal marks the fourth FTA signed under the Park administration following bilateral trade pacts with Australia, Canada and China.

The Korea-China FTA was effectively concluded after Park’s meeting with President Xi Jinping along the sidelines of the Asia Pacific Economic Cooperation (APEC) summit in Beijing a week ago.

Negotiations toward a Korea-New Zealand FTA were first announced by then-President Lee Myung-bak and Prime Minister Key in 2009 following a summit in New Zealand.

“Because a middle ground could not be found in the negotiations process for the Korea-Canada FTA that was concluded last March, it nearly fell apart,” a Blue House official said yesterday. “At that time, President Park realized that Canada wanted a resumption of negotiations even more strongly than we did, and she realized at that time [the need for more FTAs for Korea].”

New Zealand is also one of the 12 potential members of the U.S.-led Trans-Pacific Partnership (TPP), a regional free trade agreement excluding China.

“Free trade agreements are a springboard for our economy, and President Park is working towards opening such windows,” Lee Kyung-tae, an economics professor of Korea University, said. “But it is important to leave that window open through reform of our economy through structural reforms and innovation.”

At the two-day G-20 leaders’ summit in Brisbane yesterday, Park emphasized the need for partnerships between developing and developed nations through trade.

She expressed concern that a lack of unity among developed countries’ fiscal policies is “a burden on developing nations’ economies” at the summit as leaders tackled issues such as lifting the GDP of G-20 nations by at least 2 percent by 2018, collaboration on energy and climate change.

Park proposed her creative economy initiative “as a new engine for growth” for the world by enabling development of new jobs through an innovative market and putting value on science and technology, ICT, and a fusion of cultures.

She also held a meeting with Saudi Crown Prince Salman bin Abdulaziz Al Saud yesterday to discuss expanding construction and infrastructure projects between the countries, according to the Blue House.

Park concludes her nine-day, three-country trip to China, Myanmar and Australia and returns to Seoul today.