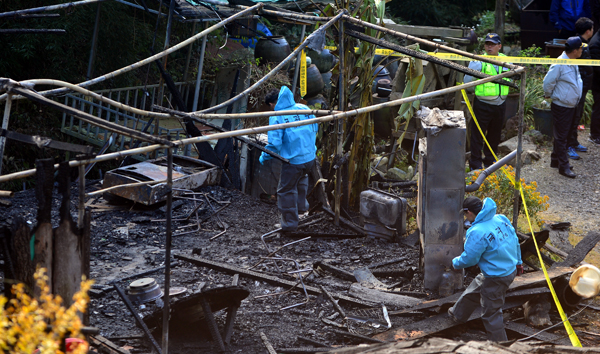 A fire broke out at a guesthouse in Damyang County, South Jeolla, on Saturday, killing four people and injuring six, most of whom were current or former members of a university paragliding club on an overnight training camp.

Of the four dead, three were male graduates of Dongshin University in Naju, South Jeolla. The other was a female undergraduate.

The undergraduate was 19-year-old Ko Eun-bi, a freshman at Dongshin University.

Choi Hong-yong, the 55-year-old owner of the guesthouse, and a 20-year-old guest who reportedly has no connection to the paragliding club, were two of the six people injured in the blaze.

The fire service said that Choi is a lawmaker representing Buk District in Gwangju, South Jeolla.

The injured are currently being treated for burns in four different hospitals in Gwangju.

According to police, the blaze began at 9:45 p.m. on Saturday in a detached wooden facility used exclusively for barbecues. It was located five meters (16.4 feet) away from the guesthouse’s main building.

Twenty-six of the paragliders, including 13 Dongshin graduates who are former members of the club, returned from training at Mount Wolbong at around 6:30 p.m. and began their barbecue at 7:20 p.m., according to the police.

A while later, a fire started in one of the four grills inside the structure after a loud explosion was heard, the police said, adding that this information is based on the testimonies of witnesses at the scene.

The initial cause of the fire has not yet been confirmed, officers said.

An unidentified person poured water on the barbecue to extinguish the fire, which exacerbated the flames as they mixed with the oil that surrounded the inner grill, sparking another explosion and causing the flames to spread across the room.

The fire service said that the thatched silver-grass rooftop caught on fire due to the sparks from the second explosion.

From there, the blaze transferred to the wall and finally to the floor.

All 26 of the people inside the structure, including 21 of the club members and five others, were soon reportedly surrounded by flames and tried to escape through the single entrance.

Based on what a female survivor told him, Song said that the fire spread “instantly” to all corners of the room, which made it “impossible” for anyone to stop it or evacuate the building. According to Song, the witness said it took three seconds for her to arrive at the entrance, and that when she looked back she saw four people “burning.”

Another survivor said that a fire extinguisher was nowhere to be found at the scene of the accident, and that the one discovered at a nearby location “malfunctioned in less than a single minute.”