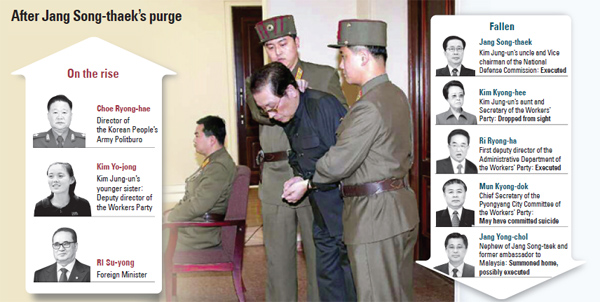 Security guards take Jang Song-thaek, uncle of North Korean leader Kim Jong-un, to a tribunal, where he stood handcuffed with apparent bruises on his hands and face. North Korea announced Jang was executed right after the tribunal. The Rodong Sinmun published this photo on Page 2 on Dec. 13, 2013. [Rodong Sinmun]


It has been almost one year since Kim Jong-un’s brutal execution of his powerful uncle, Jang Song-thaek, shocked the world.

North Korea has continued to feel a deepening of its diplomatic isolation ever since.

Jang, husband of Kim’s fraternal aunt and the vice chairman of the National Defense Commission, was the de facto guardian of the young ruler after he took control of the reclusive communist regime after the death of his father Kim Jong-il in December 2011. It took just two years for the new leader to purge his powerful, 67-year-old uncle in the most brutal way imaginable.

Although their department oversees all the law enforcement in the North, they could not resist the arrests. The Administrative Department of the Workers’ Party was later dismantled and its key members were purged over the past year.

The North confirmed the downfall of Kim’s former mentor and protector on Dec. 9, 2013, by releasing photos of Jang being arrested at a party meeting. Four days later, it announced that Jang had been executed after he was convicted of treason by a special military tribunal.

Since then, the power elite of the North has faced turmoil. While new politicians and military leaders rose to power, those who were close to Jang were swiftly removed.

The whereabouts of Kim Kyong-hee, Jang’s widow and younger sister of the late Kim Jong-il, have been unclear over the past year. South Korean intelligence authorities said she was not executed, but she has rarely been seen in official dispatches.

Ri, the closest confidant of Jang, was executed.

Mun Kyong-dok, who was in charge of the Workers’ Party’s Pyongyang Chapter, was purged and rumors spread that he committed suicide.

Jang Yong-chol, Jang’s nephew who served as the North’s ambassador to Malaysia, was called back to the homeland. He was reportedly executed.

The North Korean ruler also made efforts to erase traces of his once powerful uncle. The Taedonggang Tile Factory, which was considered a source of money for Jang, was renamed recently Chollima Factory.

According to the North’s reports on Jang’s execution, he was criticized for disobeying Kim’s order. Kim ordered the factory to create a tile mural to commemorate his father Kim Jong-il, but Jang later told the factory to build it in an obscure corner, not a prominent position, the reports said.

While Jang loyalists disappeared from the inner circle, new faces who pledged their absolute loyalty to Kim Jong-un rose to power.

Choe Ryong-hae, director of the Korean People’s Army Politburo, has been one of the main patrons of Kim since he was the heir apparent. While Jang and Kim Kyong-hee lost their clout, Kim continued to employee Choe in key positions.

Choe recently replaced Jang to be chairman of the State Physical Culture and Sports Guidance Commission.

Ri Su-yong, who supported the young ruler during his studies abroad in Switzerland as the North’s ambassador there, was promoted to foreign minister in April.

After executing Jang, the North also announced that he had sold the country’s precious natural resources, including coal, for cheap prices to a foreign buyer, targeting China.

The execution also served as another opportunity for the international community to pay attention to the North’s human rights situation. Japan and the European Union are urging the United Nations to recommend a referral of North Korea to the International Criminal Court for crimes against humanity.