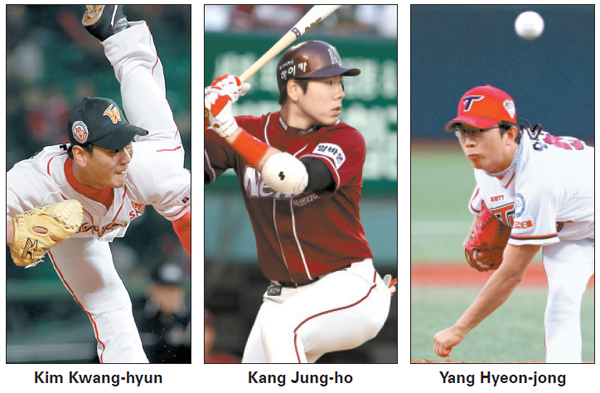 The Dodgers raised some eyebrows when they gave Ryu $25 million, but the big left-hander has turned out to be a bargain.

Records in one country may be meaningless in other countries. Statistics are only a point of reference, and what matters more is potential.

And that is why scouting reports based on experience and intuition are important. The magazine Baseball America cited a Dodgers scouting report on Ryu that says “his best off-speed pitch is his changeup, which scouts peg as 60 on a scale of 20 to 80” and a “potential No. 3 starter.”

The Los Angeles scouts were correct.

Recently, Kim Kwang-hyun of the SK Wyverns, Yang Hyeon-jong of the KIA Tigers and Kang Jung-ho of the Nexen Heroes announced they would give MLB a shot.

Kim, who is the most promising among the three, attracted a disappointing $2 million posting bid from the San Diego Padres.

Kim is a left-handed power pitcher, which is as rare in the United States as it is in Korea. He has a 150-kilometer-per-hour (93-mile-per-hour) fastball and a nasty slider. He won 13 games this year to bring the total for his career to 83.

His statistics may sound attractive, but a $2 million bid price is more in line with rookies than veteran starting pitchers.

The reason is that Kim throws hard but not hard enough to overwhelm MLB hitters. He has less control of his pitches than Ryu, and he is seen as being susceptible to shoulder injuries because of his powerful pitching motion. Kim already suffered an injury to his left shoulder in 2012.

Another rarity is Kang, a shortstop with power. He hit 40 home runs this year, but he also comes with some question marks.

The right-handed hitter lifts his left knee before swinging, assuming a certain kind of pitch and location. There have been a few hitters who lifted their knees who have succeeded in MLB. If he changes his swing or moves to second or third base, it could be a huge disadvantage.

Left-hander Yang also requested a posting on Monday. His fastballs are about 145 kilometers per hour, not as fast as Ryu or Kim, but he has very good control. However, his physique may not fit what major league teams want. The six-foot pitcher is relatively smaller that most big league starters and his performance waned this year as the season wore on. He posted a 3.56 ERA in the first half, but 5.62 in the second half.

The major leagues would be tougher on his stamina because of more travel and a longer season of 162 games compared to 128 games in the KBO.

Ryu’s case may have been a huge motivation for the three potential major leaguers, but the fact that they had better performances than Ryu during his last year in the KBO is no guarantee they also will do better in the major leagues.