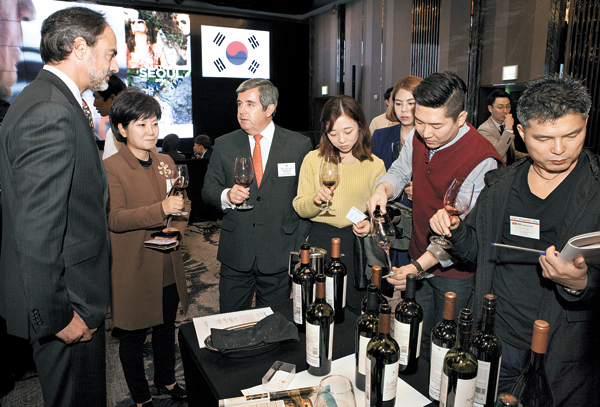 Guests taste Argentine wines during the “Wines of Argentina Asia Tour 2014” on Monday at the JW Marriott Hotel in Jongno District, central Seoul. By Park Sang-moon

The smell of wine filled the lower lobby of the JW Marriott Hotel in Jongno District, central Seoul, during the “Wines of Argentina Asia Tour 2014” on Monday.

Guests at the event swirled wine in their glasses, tasted it and carefully read the bottle to learn more about wines from Argentina. Twenty-one wineries from the nation placed several of their most representative brands on each table to show their quality.

Argentine wines are relatively new to Koreans compared to consumers in other countries.

“We only have two Argentine wines at our restaurant,” said Kim Seung-jong who works at Vinamour, a wine bar in Mapo District, northeastern Seoul. “So my boss sent me here to explore Argentine wines.”

The tasting event was part of promotional agency Wines of Argentina and the Argentine Embassy’s efforts to publicize their products in Asia. Korea is the fourth-largest market for wine in Asia following China, Japan and Hong Kong, said Mario Giordano, the general manager of Wines of Argentina.

Jorge Roballo, Argentine ambassador to Korea, said that about 60 companies here currently import wines from his country, but he added that many do not market these brands because they lack knowledge about them. The fact that there is no free trade agreement (FTA) between Korea and Argentina is another barrier that hinders Argentine wines from penetrating the Korean market. Importers can buy wines from Chile, which has an FTA with Korea, for example, relatively cheaper in comparison.

“That is why we are making a noise by hosting this kind of event and showing there are different wines that have good qualities such as must-drink Argentine Malbec wines,” said Roballo.

Malbec is a red grape that is widely grown in Argentina and is the most popular variety in the nation. Giordano likened Malbec to tango, his nation’s well-known dance.

Argentina is a country in which wine is a popular drink. As a result, the nation’s wine industry previously focused mainly on domestic consumers. It was not until the early 1990s that Argentina began looking for a new market, turning its eyes to the rest of the world when it fell into an economic recession during that period.

Now, Wines of Argentina hosts more than 200 events around the world every year, such as wine fairs and blind tastings, to “teach people who do not know much about Argentine wines,” said Giordano.

Korean people are more accustomed to drinking soju, makgeolli (traditional rice wine) or beer. But they are slowly discovering wines, following whisky and cognac in terms of popularity.

Over the last three years, the wine market has especially started to expand, said Kim Chang-yong, a professor at the Graduate School of Tourism at Sejong University.

“For example, if you go to a wedding nowadays, you can easily see bottles of wine on tables,” Kim said. “That is one of the signs that wine has become a popular drink in Korea. It was not like that about 10 years ago.”

Many restaurants in Itaewon-dong, central Seoul, and Gangnam District, southern Seoul, which are popular areas for young people and non-Koreans to hang out, have actively begun to bring in wines in the last two or three years, said Joseph Yun, a brand manager at Dongwon Wineplus, a domestic wine and champagne importer and distributor.

“It seems more people have begun to enjoy wine in comfortable ways these days in Korea. Concepts such as ‘wine pocha’ have begun to settle down as part of our culture,” Yun said.

Pocha, an abbreviation of pojangmacha, is a food or alcohol vendor that sets up outdoor tents. In Korean, it means a “wagon that camps on the street.” Korean people usually enjoy soju, beer or appetizers in these locations.

“Wine pocha” derives from the concept and was created to allow people to enjoy wine in a casual way, breaking the stereotype that the beverage is for upper-class people.

When it comes to the Asian market, where the wine industry has begun to open up, Giordano said, “We must go step by step. If people trust you, the market will grow.”