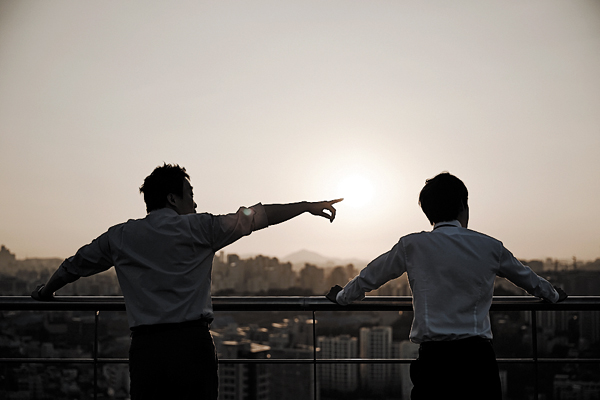 Many scenes in tvN office drama “Misaeng” take place on the rooftop of the office building. It is where tired workers talk openheartedly and console one another. Provided by tvN

Ever feel like you’re not getting credit for your work? Or been reprimanded by your boss for something that wasn’t your fault? Have you been stabbed in the back by your colleague, or do you feel like you’re stuck in one place even though you’ve toiled away for years? 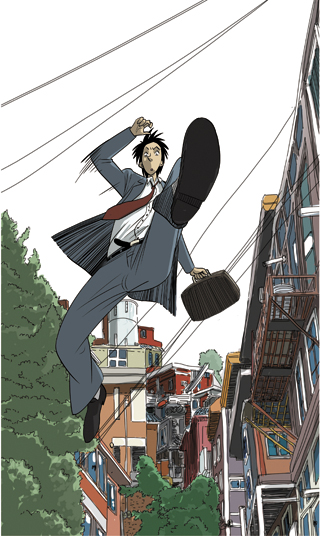 The new tvN drama “Misaeng” speaks volumes to “average Joes” in the working world who can identify with any of these situations.

Misaeng is a term in the game Go that refers to an incomplete state, but this drama incorporates the idea in the workplace. The program is for pretty much anyone who works at a company and at times asks, “What am I doing with my life?”

The show, which is based on the popular web cartoon of the same name, is creating a buzz in Korea.

Jang Geu-rae, the main character, is short. He has bright eyes but they rarely twinkle. He feels clueless and his future is uncertain.

Critics say one the reasons for the drama’s success is because viewers can easily relate to Jang - a person who works hard but his efforts go unnoticed more often than not. These viewers dream that they are the secret children of super successful and super rich business tycoons or possess a supernatural power. But the reality is that they’re not and they don’t.

In fact, they have never even been near those people, and chances are they never will. All they can do is try hard and take one day at a time.

“Misaeng” clearly differs from other Korean soap operas set in an office.

If it were similar to those, Jang’s female colleague, Gang So-ra, would turn out to be the daughter of the company’s chairman and Jang would have fallen in love with her. There would also be a love triangle among the two and another guy at the office, Jang Baek-gi.

Chances are that Jang Geu-rae, who is highly competent and caring, with good looks and manners, would have won Gang’s heart - plus her wealth.

“‘Misaeng’ doesn’t care about those things,” cartoon critic Park In-ha says, “and instead, it’s interested in individuals’ daily chores, however tedious and unimportant they may seem. It shows them in detail, giving the message that they all matter.”

Making photocopies, answering phone calls for your boss, gluing receipts and making PowerPoint slides - “Misaeng” is saying that these tasks are not worthless, Park says.

“The life of office workers today is tiring,” Park explains. “Competition is neck-and-neck and the future is uncertain. ‘Misaeng’ quenches the thirst of those people, us, through the power of sympathy.”

And it’s not just the main character that speaks to the people. Assistant manager Park is soft-hearted and, as a result, is used by others; manager Oh was not promoted due to trouble with his boss; and senior manager Seon, a working mother, has to come into the office after taking her kid to day care. These are people that many in the corporate world are all too familiar with.

Titles like assistant manager, manager and senior manager are somewhat unique to Korean workplace culture in terms of when these roles are given to workers. An assistant manager, for example, is a title given to someone who joined the work force three years or so ago. The concept is similar to a sophomore in college and sets them apart from those in their first year of work, who can be compared to freshmen.

Assistant managers, or daeri, are often the main characters in office dramas and cartoons as it is this group that tend to be taken advantage of the most by their seniors because they still have the passion of a newcomer but are not as inexperienced and don’t know what’s going on in the office.

From web to TV

The characters’ lines in “Misaeng” also evoke empathy from viewers. Park, who comes to work with a resignation letter in his pocket every day, says in a monologue: “People told me to do what my heart tells me to do. But I can’t. My family depends on me.”

Seon, meanwhile, says after taking her child to day care, “I guess you’re used to seeing my back. I promise you: I will not make excuses anymore.”

Critics say “Misaeng” is unlike typical Korean dramas that deal with office politics because the others almost always feature the protagonist’s dramatic success or a heartbreaking love story.

“Misaeng shows the things that go on in the office just as they are, without any embellishment,” said Lee Jong-gyu, a professor of cartoon making at the Chungkang College of Cultural Industries. He added that “Misaeng” may be the first cartoon-based drama to succeed after the “Formidable Minority League” (1986).

The web cartoon of “Misaeng” was published on the Internet portal Daum between January 2012 and July 2013, creating waves across the country. The web cartoon, or webtoon was popular, particularly among those in their 20s and 30s, and recorded more than one billion views.

The graphic novel, published last October, also sold a record one million copies. And the TV drama, which is currently airing, has a wide range of fans, as snippets of the drama are being spread on social media - in short video clips or collections of memorable lines.

“I haven’t seen the drama, but I know ‘Misaeng’ well. My Facebook friends often post video clips or lines from it,” said Moon Seon-yeong, a 27-year-old office worker. She says she was particularly moved by the scene where the interns have to prepare a presentation, as she felt like it was similar to a situation she experienced.

Kim Bong-min, 38, said he related to a story about a boss taking credit for the work of others. “I was a big fan of the webtoon and am pretty happy about the drama version, too,” he said.

Gong Hee-jeong, who was both a worker at a telecom company and a culture critic, is an extreme case. She decided to quit the company she worked at for 27 years, partly because of “Misaeng.”

“It’s the drama of my lifetime,” she said after quitting on Oct. 31. “I got to reflect on who I am through the drama, and question myself, asking, ‘would I live like the loyal guy, Manager Oh, or Senior Vice President Choi, who is only interested in moving up the ladder?’?”

A reflection of real people

When you look at statistics related to working life, “Misaeng” becomes very true to life. A recent survey by recruitment website Saramin showed that 93 percent of respondents said they have gone to work when sick. It is a well-known fact that staff in Korea work more hours than those in any other country in the Organization for Economic Cooperation of Development.

Welfare service website Easy Welfare reported that about half of Korean workers said they are most concerned about being poor when they are old. In addition, a figure by a real-estate company shows that an average worker can buy a 60-square-meter (646-square-foot) apartment to 70-square-meter apartment if they work for 13 years and save their entire salary during that time.

Instability and uncertainty also reflect a change in workers’ values.

The Korea Employment Information Service said last month that job-seekers these days prioritize stability more than anything. Ten years ago, they picked a sense of achievement as the most important value.

“As irregular positions increase and early retirement - in the 40s and 50s - become more frequent, job-seekers nowadays appear to be valuing stability over anything else,” said Lee Hyo-nam, a senior researcher at the Korea Employment Information Service.

Yun Tae-ho, the writer of the original webtoon, said in a recent interview with the JoongAng Sunday that “we all desire to provide a shoulder to lean on to our children. I want to tell them that, ‘You are on the right path,’ and that not betraying yourself is a way to self-realization.”

Manager Oh, for instance, is warm and caring. He may not be a successful, competent and rich guy, but he cares about his co-workers and family. Jang Geu-rae is also not a successful guy. His future is volatile, but he puts his heart into what he does every day. Writer Yun wanted to tell us that both Oh and Jang are on the right path, regardless of their lack of success. That is the message a lot of people want, and need, to hear.