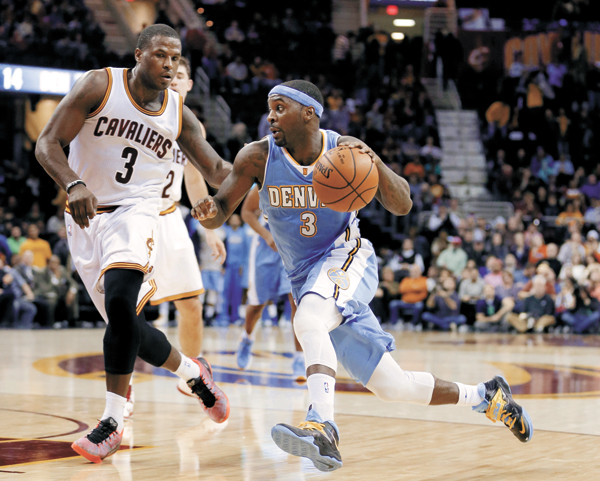 Denver took the lead for good early in the third quarter and was up by as many as 14 points midway through the fourth.

LeBron James, who missed the morning shootaround because of a cold, led Cleveland with 22 points.

The Nuggets limped into the game having lost seven of eight and were coming off Sunday’s defeat at New York in which they made one field goal in the second quarter.

Denver looked like a different team Monday, placing five players in double figures. Leading 90-84, the Nuggets scored eight straight points and went ahead 98-84 on Lawson’s layup with 6:01 to play.

Cleveland, which hit its first 11 3-pointers Saturday against Atlanta, failed to reach 100 points for the first time in six games.

James told reporters an hour before the opening tip that “I’ve been better,’’ but “I’m walking.’’ He said the cold has been bothering him for a couple of days. He was 8 for 18 from the field with nine rebounds and five assists.

James, the NBA’s leading scorer, was selected the Eastern Conference Player of the Week for a record 46th time Monday.

Kevin Love, Kyrie Irving and Dion Waiters each scored 20 points for the Cavs.

Cleveland’s winning streak began with a 110-101 victory in Denver on Nov. 7, but this matchup was a different story. Afflalo was scoreless in 31 minutes in that game and Lawson didn’t play because of an ankle injury.

The lead changed hands 11 times in the first half and Denver was up 53-52 at the break.

Leading 60-57 early in the third, the Nuggets had a four-point possession. Mozgov made two free throws after Anderson Varejao was called for a flagrant foul, and Lawson followed with a basket. James hit a 3-pointer, but Kenneth Faried scored on a layup and Afflalo knocked down a 3-pointer for a 69-60 lead midway through the quarter.

Faried made the defensive play of the game in the third when he stole the ball out of Love’s hands and started a break that resulted in Afflalo’s free throw for a 79-69 lead with 2:34 remaining.