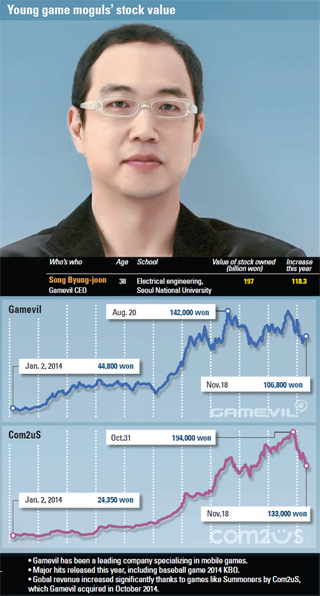 Mobile game companies have become one of the biggest beneficiaries of the widespread use of phablets and tablets, with soaring stock values on the Kosdaq boosting the wealth of CEOs.

Most of these CEOs are in their 30s and 40s and many founded their game companies with either family members or friends. They are also aggressive in expanding into the United States, China and Southeast Asia.

One of the rising mobile game moguls is 38-year-old Song Byung-joon, founder and CEO of Gamevil.

Song was the first chairman of a start-up community at Seoul National University. It was about this time that he was first exposed to mobile games, and in 2000 he founded Gamevil with 50 million won. Today, his game company is one of Korea’s leading mobile game developers.

Gamevil this year has enjoyed a particularly big boost thanks to the popularity of new games such as the baseball game 2014 KBO.

Another winning move was the acquisition of game company Com2uS last year for 70 billion won.

At the time of the acquisition, local brokerages were skeptical since the price was nearly equal to Gamevil’s annual revenue.

However, Song’s assessment on Com2uS as a lucrative investment hit the mark. Games developed by Com2uS and released this year such as Gods of Fishing and Summoners War have gained a wide following; 20 million users downloaded Summoners War after it was released in June. Revenue earned by Com2uS in the third quarter surged 438 percent from a year ago to 46 billion won, net profit expanded 3,165 percent to 40.9 billion won and shares surged 467 percent.

Song recently has been busy setting up operations in Southeast Asia. It already operates in the United States, Japan and China. Recently, he set up an operation in Singapore and has plans to move into Hong Kong and Macao.

SundayToz CEO Lee Jung-woong, 33, created Anipang, the most played mobile game in Korea. His 20.15 percent stake in the company has skyrocketed from 27.5 billion won to 111.4 billion won this year.

SundayToz was founded by three friends majoring in computer science at Myongji University in 2009.

The three were avid gamers and after graduation, they got together every Sunday at a meeting place called Toz, hence the company’s name.

It took the three years to develop the mobile game Anipang, which launched in July 2012. The game became a national sensation, grabbing 20 million users within 74 days of its release. That means two of three smartphone owners were playing the game.

Backed by the success of Anipang, SundayToz succeeded on a back-door listing on the Kosdaq in November. Earlier this year, the company released its latest game, Anipang2, which also became a hit.

SundayToz’s Lee is also focused on expanding overseas. In March, he became the leading stakeholder of global online game company Smilegate and plans to expand the mobile game market in the United States and China. 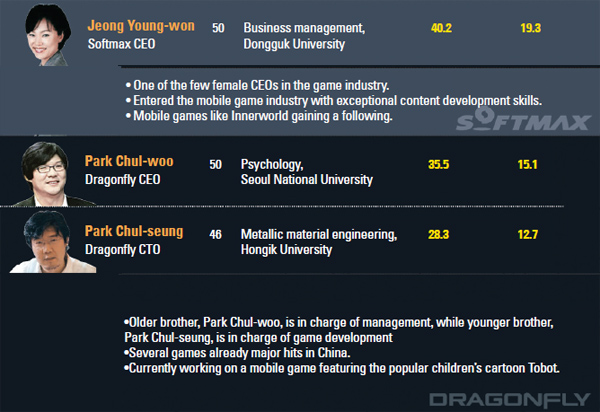 Among the latest members of the nouveau mobile-game riche is 36-year-old Lee Ji-hoon, CEO and co-founder of Devsisters.

Lee hit the jackpot after his 28.09 percent stake in his company soared after it got listed on the Kosdaq last month to 185 billion won. The value of the 6.09 percent stake owned by co-founder Kim Jong-heun is roughly 34 billion won. Kim, after graduating from Seoul National University in business management, earned his MBA at Stanford University. In 2005, he was working as a venture capitalist in the United States. It was here that he met with Lee for the first time.

Lee, who was a visual designer, met with Kim to ask about investment. But it was Kim who got interested in the game content Lee was working on. He joined the company in 2011. Today, Lee is in charge of game development and planning, and Kim takes care of management.

The game content that grabbed Kim’s attention was Cookie Run. The mobile game is about 35 different flavors of gingerbread men running from being baked in an oven.

Not only did it become an instant hit in Korea, but also in Thailand, Taiwan and Japan.

Thanks to the popularity of the game, the company succeeded in being listed on the Kosdaq last month. Experts say the company is too focused on Cookie Run.

“There’s too much dependency on a single game, which is the biggest risk for the company,” said a Yuanta Securities analyst. “But there is a strong growth possibility as its global sales continue to expand.”

The company’s revenue has increased 124 percent to 43.7 billion won in the first half of this year.

The Park brothers of Dragonfly have also become wealthy. This is a company that was founded by younger brother Park Chul-seung. Older brother Park Chul-woo, who was working at telecommunications company Hansol PCS, joined Dragonfly in 2000 at his brother’s request to focus on game development.

Since the older Park joined the company, Chul-woo has been in charge of managing the company as CEO while the younger Chul-seung is the company’s CTO.

Today, Chul-woo’s stake in the company is estimated to be worth 35.5 billion won, while the younger brother’s is 28.3 billion won. The share value of the company has risen 82 percent from the beginning of the year. 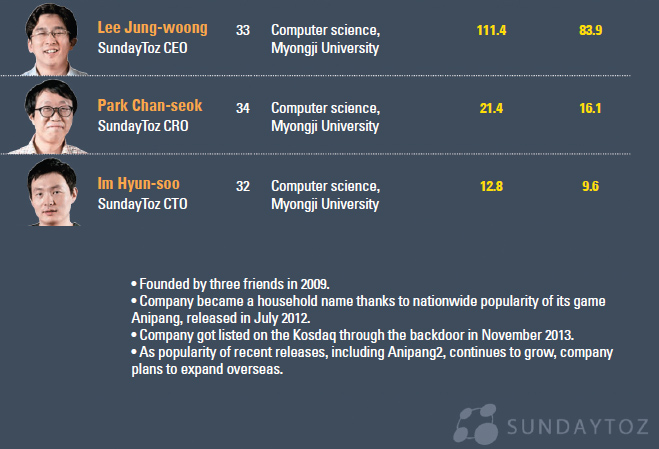 Dragonfly is famous for its first-person shooting games such as Karma Online and Special Forces.

In fact, Special Forces has more than 15 million subscribers and enjoys a huge following in Southeast Asia.

Jeong Young-won, CEO of Softmax, is one of the few female heads in an otherwise male-dominant game industry. The value of stocks that Jeong has in Softmax has nearly doubled from 20.8 billion won at the beginning of the year to 40.2 billion won today.
But not all enjoy rising stock values in the game industry. Founder and CEO of NCSoft Kim Taek-jin has recently been losing. His 9.9 percent stake in the company has lost 222 billion won with share prices falling from 250,000 won at the beginning of the year to 147,000 won.