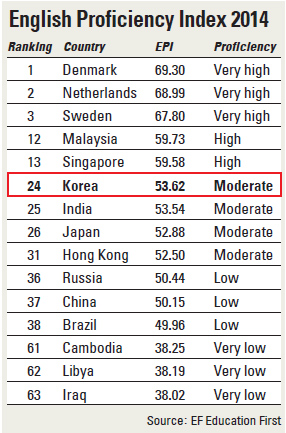 EF Education First, an international language training company that has its headquarters in Switzerland, released the results of its fourth annual EF English Proficiency Index on Tuesday, (EPI) which ranked Korea 24 out of 63 countries.

According to the index, Korea scored 53.62 - a moderate proficiency level - on a scale from zero to 100. Within the country, North Gyeongsang had the highest English proficiency, with a score of 55.61 and South Gyeongsang ranked the lowest at 51.05. Seoul recorded a proficiency of 55.61.

Denmark topped the list with a rating of 69.3, followed by the Netherlands at 68.99 and Sweden with 67.8. Iraq, Libya and Cambodia were the three lowest ranking countries with their scores ranking in the low 38’s.

The survey was based on 750,000 people from 63 countries who took an EF proficiency test.

Of the 14 Asian countries included, Korea ranked third after Malaysia and Singapore. Considering the country’s focus on English education, the ranking may seem acceptable. But according to Christopher McCormick, EF senior vice president of academic affairs, Korea isn’t progressing.

Korea declined 0.57 this year compared to last year’s EPI. And unlike the global trend, which shows English proficiency peaking among adults aged 35 through 44, Koreans show the highest level of proficiency between the ages of 18 and 24.

McCormick said that high performance in other areas in Korean education doesn’t transfer over to English.

“The quality is there across math, science and reading, [and] we know it’s possible,” he said. “But that means there is an implication here about methodology for teaching English. Perhaps we need to rethink the methods we’re using to teach English, because it’s not matching those results.”

To dissolve the disparity in English education, McCormick said that EF will attempt to “democratize” English-language tests.

This year, the company launched the EF Standard English Test (Efset), a free standardized exam that aims to measure how people communicate.

“There are about 10 million people who take the Toefl or Ielts,” he said. “They are specific kinds of people who, for example, may want to study in an English-speaking country. However, there are two billion people who use English and don’t need the specific, expensive exams required by academic institutions.”

Two versions of the test are available online and determine the individual’s level in accordance with Europe’s guidelines, called the Common European Framework of Reference for Languages. Efset has a 50-minute test and a two-hour Efset Plus, which gives a score of one to 100.

The test can be used to assess language ability regardless of how high or low the test taker’s level may be, the EF vice president said. It could also be a free tool for people to gauge if and when they are ready to take standardized tests, he added.

According to Yoon Seon-joo, country manager of EF Education First Korea, the data collected from Efset will be used for research to improve language education in the country.

“The mission state of the organization is opening the world through education. And as a family-owned, privately held company, the owners have made this commitment to share information with the wider world,” McCormick said.