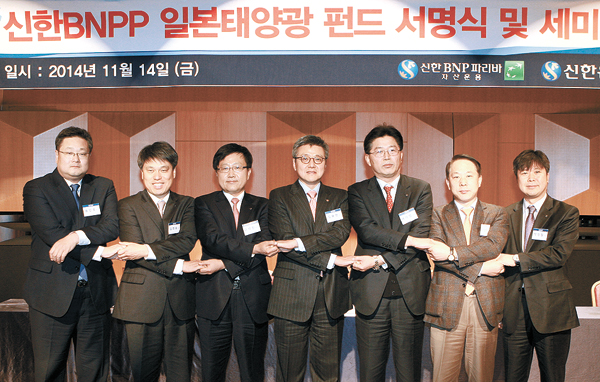 Officials from investor companies pose after a signing ceremony for Shinhan’s new fund on Nov. 14 at Shinhan Art Hall in southern Seoul. Provided by the company

The fund is a closed-end private equity investment with a set period of 23 years that targets Japanese companies running or participating in photovoltaic generation. Shinhan BNP Paribas Asset Management, the operator of the fund, will grant the related corporate bodies an investment quota and will make a subordinated bond investment.

After the 2011 Fukushima nuclear accident, the Japanese government expanded the portion of new renewable energy in its national supply of electricity. The government set a plan to oblige the purchase of renewable energy sources at a fixed price for 20 years for the stability of the nation’s energy supply.

Shinhan has been preparing for the fund since last year by participating in Japan’s photovoltaic energy business. Its differentiated competitiveness coming from a long-term, low-interest yen loan and its nine local offices of Shinhan Bank Japan (SBJ) helped the company establish firm ground for its fund. The strong foundation attracted investors to the first blind fund on foreign renewable energy market by a Korean financial institution.

Shinhan’s new fund will allow Korean companies to actively partake in Japan’s photovoltaic power generation market without the difficulties of finding overseas financing. According to a company official, the fund is considered as a pioneer case in the industry as it successfully escaped the heated competition in the national financial market and set a new business model in a new market. SBJ’s establishment of package financing, which provides equity and subordinated loans for overseas business projects and financing service, is an example of the new financial business model.

“We expect to present a model case of creative financial services to expand out from the stagnant local financial market with our compound product that offers both loan and investment for overseas business,” said a Shinhan Financial Group official.