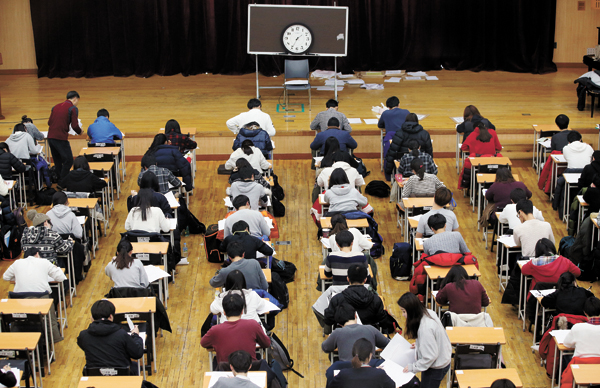 Applicants to the University of Seoul take an essay test at the school’s main auditorium in Dongdaemun District, central Seoul on Tuesday. [NEWS1]


A week after the annual college entrance exam spurred the usual yearly anxiety about scores and ambiguous questions, test-takers raided the website of the government organization that administers the test to claim a grading mistake was made on the English section. The brouhaha comes just days after the Ministry of Education admitted an error in grading last year’s world geography section.

Over 13,000 complaints were posted on the question and answer board of the Korea Institute for Curriculum and Evaluation (KICE) as of Tuesday, most related to the 25th question of the English section on Thursday’s College Scholastic Aptitude Test (CSAT).

The question asked students to determine which of five sentences commenting on a graph was incorrect. The graph showed “the percentages of Americans aged 12 to 17 who posted certain types of personal information on social media sites in 2006 and 2012.”

The controversy is over the fifth sentence, which read: “Compared to 2006, 2012 recorded an eighteen percent increase in the category of cell phone numbers.”

That was supposed to be a correct answer. The bar graph showed growth of 2 percent in 2006 and 20 percent in 2012. Some students are arguing that to be correct, the fifth answer should have read: “Compared to 2006, 2012 recorded an eighteen percentage point increase in the category of cell phone numbers.”

Park Seong-woo wrote Monday on the KICE website that the fifth option was “definitely wrong,” and that he thinks education authorities must admit they made a grading mistake.

Park noted that on economics tests, examinees are frequently required to distinguish the difference between percent and percentage points.

KICE announced that it will finalize the scoring for this year’s CSAT on Monday after further consultation with educational pundits.

Lee Sang-yong, an English instructor at Haneul Education, a private education institute, said in a telephone interview Tuesday that option No. 5 should also be considered wrong, “although not many test-takers would have caught that error.”

The real problem, he said, lies in the fact that 70 percent of the CSAT is based on textbooks provided by EBS, a state-run educational television channel that broadcasts supplemental learning material and makes workbooks for the CSAT. Since 2005, the CSAT has been heavily based on EBS materials, part of governmental efforts to curb the need for students to go to costly cram schools to prepare for the test. Question No. 25 was based on an EBS textbook, Lee said.

“It’s preposterous that 70 percent of the English CSAT exam is based on EBS,” he said, adding that genuine reading comprehension skills lie in the ability to understand a written passage that’s never been seen before, not memorized from a book.

“The CSAT shouldn’t be like a high school English test, where students memorize the passages in textbooks and try to recall whatever they previously read during test time,” he stressed.