The global economy has been overwhelmed by fears of deflation from Japan to the European Union. And Korea’s rate of inflation keeps getting lower and lower.

In Japan, the economy has posted negative growth for the past two quarters, putting the ambitious Abenomics initiative at risk of failing. Prime Minister Shinzo Abe is even withdrawing his plan to raise the sales tax again in October 2015 and intends to ramp up quantitative easing by printing more money.

The head of the European Central Bank, Mario Draghi, has suggested purchasing Treasury bonds and is expected to start discussing 1 trillion euros ($1.25 trillion) worth of quantitative easing on Dec. 4. 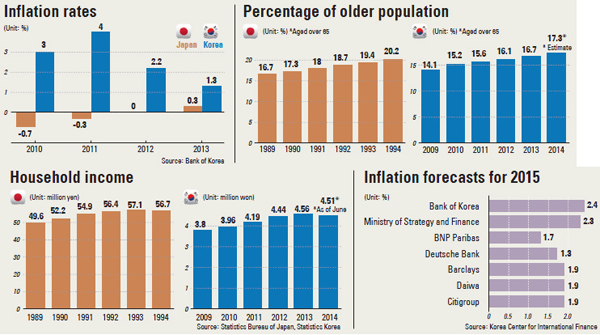 Facing an economic slowdown, China is trying to prevent deflation by pouring cheap exports into the global market.

And the global deflation fears already are influencing the Korean economy.

Growth of domestic consumer prices has been hovering in the neighborhood of 1 percent for the past 24 months. Producer prices contracted earlier this year, and after picking up briefly are back in negative territory. Given that producer prices are a leading indicator of consumer prices, the rate of domestic price growth is expected to go even lower in the next few months. Japan and the EU’s quantitative easing measures are likely to aggravate the inflation situation here.

Quantitative easing measures in countries where currencies are used as international currencies have the effect of passing deflation worries on to other countries.

For example, if Japan ramps up its quantitative easing measures, the yen’s value depreciates. This will make Japanese products cheaper in overseas markets. This year, Japanese carmakers slashed export prices by 8 percent to 15 percent. In the United States, Sony TVs are selling at half price. The reason Uniqlo so frequently throws bargain sales is the weakening yen.

Meanwhile, in Japan, the weak yen helps domestic prices rise by raising the cost of imports. In other words, the weak yen is exporting deflation to other countries, while importing inflation to Japan.

Such quantitative easing measures in advanced economies can threaten emerging markets. However, the Korean central bank and the government favor low inflation.

Since low inflation lessens the burden on consumers, the central bank and the government have been trying to hold the rate down.

But experts say the Korean economy is on the brink of falling into deflation and Japan’s lost decades could become our story, too.

“When Japan started experiencing deflation, the country ignored it as if it were another country’s story,” said Hong Sung-kuk, vice president of Daewoo Securities. “Korea is following suit.”

In order not to be trapped in the mire of deflation, authorities should send consistent signals to the market, analysts say.

The reason why Abenomics is about to fail is the increase in the sales tax, which was read by the market as being in opposition to the Japanese government’s efforts to loosen monetary policy.

“Abenomics proves the risks of deflation,” said Lee Sang-bin, a finance professor at Hanyang University. “If the Korean government and central bank do not signal aggressive inflation policies, worries of deflation could become a reality soon.”

“The central bank couldn’t reach its target inflation rate because low inflation is a global phenomenon,” said Lee Ju-yeol, governor of the Bank of Korea, at the bank’s monetary policy committee meeting Nov. 13.

Lee’s remark served only to reinforce market distrust of the central bank’s policy.

While Japan and the EU take aggressive measures to stave off deflation, the Korean government and BOK aren’t doing anything.

The BOK’s target range of inflation is 2.5 to 3.5 percent. Based on the BOK target, the government set this year’s target inflation at 2.5 percent, far higher than the actual inflation rate of about 1 percent.

Lee said in a lecture on Tuesday there is no remedy for deflation. “But we don’t have to worry about deflation yet,” he added.

The central bank seems too optimistic about the current situation.

While the BOK forecasts a 2.4 increase in prices next year, major foreign institutions project lower price growth for Korea. France’s BNP Paribas and Germany’s Deutsche Bank believe it will be less than 2 percent.

Finance Minister Choi Kyung-hwan and his economic team, too, seem to lack any sense of urgency about low inflation.

Due to the 1 percent inflation rate continuing for nearly two years, the government reduced its meetings on inflation issues from 31 in 2012 to seven last year. This year, such meetings were held only twice, ahead of the Lunar New Year and Chuseok holidays.

“Because past governments had to deal with high inflation, both the current government and BOK seem like they have no sense of detecting a totally different economic environment,” said Lee Jong-woo, head of research at IM Investment & Securities.

“The Korean economy has been on a growth path, so both the government and BOK don’t have any experience with deflation,” said Jeon Min-kyoo, an economist at Korea Investment & Securities.

The Japanese government officially acknowledged deflation in 2001 after its first lost decade. Since the International Monetary Fund has set a standard for deflation - prices that keep falling for two years - Japan recognized the situation belatedly.

“Korea falls 20 years behind Japan in many areas,” said Oh Jung-gun, a professor at Konkuk University. “Korea in 2014 is similar to Japan in 1993, when its inflation rate was approaching zero.”

“Posting 1 percent inflation rates for two years means that deflation may be coming,” said Sung Tae-yoon, an economics professor at Yonsei University. “When consumer price growth posts negative numbers, it will mean it has arrived.”

He pointed out the problem is that at the beginning of deflation, consumers don’t sense potential problems because prices go down, adding, “But like Japan, it is hard to emerge from it once trapped.”

If consumers expect prices are going to fall further, they will postpone major purchases, leading to contraction in production by businesses.

“Japan used to like deflation in the early 1990s, calling it a good deflation, because it makes things cheaper,” said Lee Geun-tae, a research fellow at the LG Economic Research Institute. “If we misjudge, we might fall into a long-term recession like Japan.”