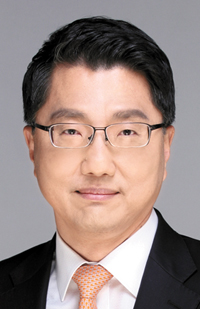 Choi Soo-hyun, the governor of the Financial Supervisory Service (FSS), abruptly tendered his resignation on Tuesday after months of pressure on him to step down.

And Noh Dae-lae, who was appointed chairman of the Fair Trade Commission (FTC) in April 2013, also resigned, saying he was exhausted. But rumors say he was squeezed out over controversial defense contracts he oversaw in a previous job.

Choi was not supposed to be a part of the presidential reshuffle announced on Tuesday but decided to resign, citing personal reasons.

The former governor has been under fire for failing to supervise financial institutions and the ham-handed measures taken after financial problems blew up. 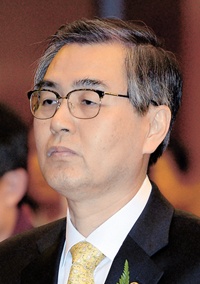 While Choi was at the helm of the financial watchdog over the past 20 months, the Korean financial market was plagued with serious financial accidents ranging from unethical scams by financial institutions to leaks of customer information.

He was also blamed for mishandling the internal strife at KB Financial Group that resulted in the replacement of the group’s chairman and its bank president in September.

“I apologize for the past financial accidents that made consumers suffer,” said Choi at a retirement ceremony on Tuesday. “Recently, the role of supervisor has been enhanced and we received many complaints and harsh criticism. But I believe this says that the market is alive, and we have to endure the process.”

Zhin Woong-seob, the current president of the Korea Finance Corporation, was appointed to replace Choi.

Zhin, a 55-year-old former government official, is renowned in the bureaucratic world for his back story. He dropped out of Dongji Commercial High School in Pohang, where former President Lee Myung-bak graduated from, and studied on his own to pass a qualification exam that gave him the equivalent of a high school diploma. He then passed state exams to become a grade-seven civil servant and started working at the Ministry of Justice.

“Nominee Zhin Woong-seob has high professionalism about financial policies and watchdog functions,” the FSC said in its recommendation to the president.

“The nominee will be the right person to regain public trust and allow the financial industry to make a new leap forward.”

Meanwhile, according to the Fair Trade Commission on Tuesday, Noh turned in his resignation.

“He said he felt exhausted and was planning on resigning a long time ago,” said a FTC spokesman.

“He postponed the resignation until he finished the National Assembly’s audit.”

But there have been questions whether Noh was sacked by the Blue House. The FTC chairman has recently come under fire over defense contracts for faulty products executed while Noh served as head of the Defense Acquisition Program Administration between 2011 and 2013.

The FTC said Noh said his resignation had nothing to do with the defense contract controversy.

The successor to Noh, former Vice Chairman of the FTC Jung Jae-chan, said once the National Assembly approves his nomination, he plans to stay true to the fundamentals.

“In 23 years of working at the FTC, one thing I realized is one has to be true to the fundamentals,” Jung said. “The role of the FTC is overlooking the market economy and umpiring it. I will be following the rule of law and of principles.”

Asked if he plans on putting more emphasis on economic stimulation over economic democratization, the newly appointed FTC chairman said he believes both could be achieved when the agency is true to its role.