Korean Air shoots for the sky with arts sponsorship

Korean Air shoots for the sky with arts sponsorship

These are pieces that almost everyone has seen a version of at least once in their lives, non-art lovers included, perhaps on mugs, mouse pads or as replicas. The originals, however, can only be seen in France as they are part of the Musee d’Orsay’s collection in Paris.

The museum, which opened in 1986, is renowned for its collection of Impressionist and Post-impressionist paintings by artists such as Claude Monet, Edgar Degas, and Paul Cezanne - most of which were taken from the Galerie nationale du Jeu de Paume, also in Paris.

However, the French museum currently only offers audio guides for its permanent collections - which includes about 300 pieces - in just nine languages. They are: French, German, English, Chinese, Spanish, Italian, Japanese, Portuguese and Russian.

As a result, Koreans who are not fluent in any of these languages could miss out on interesting facts.

Korean Air, Korea’s largest airline, has been working to expand Korean-language services at overseas museums. It successfully added the Korean language to the Musee du Louvre’s audio guide in Paris in 2008; the Hermitage Museum in St. Petersburg in 2009 (pictured left); and the British Museum in London, also in 2009. The latest deal was struck with the Musee d’Orsay in Paris (right).

But all of this will change by next year. Sometime in the first half of 2015, the Musee d’Orsay will add a Korean version to the audio guides used for its permanent collection. In addition, the museum will develop a map and catalog in Korean.

Korean Air, the nation’s largest airline and the flagship company of Hanjin Group, was behind the museum’s decision.

Despite being an airline, Korean Air knows a thing or two about museum audio guides. It successfully added the Korean language to the Musee du Louvre’s audio guide in Paris in 2008; the Hermitage Museum in St. Petersburg in 2009; and the British Museum in London, also in 2009.

The company, founded in 1969, is one of the world’s top 20 airlines, carrying more than 23 million passengers last year.

Koreans sure love to travel and enjoy quite a significant amount of freedom to do so.

According to the 2014 Henley & Partners Visa Restrictions Index, South Korean passport holders are able to travel to 172 destinations without a visa.

At the top of the rankings are citizens from the United States, the United Kingdom and Germany, among others, who can travel without a visa to 174 destinations. Canada and Denmark ranked second with 173 countries, while Korea is grouped with Japan, France and Italy, among others, in third place.

Another statistic of note related to Korean Air’s sponsorship of overseas museums is the increasing popularity of independent travel.

In the past, Koreans tended to travel overseas on so-called package tours. Such excursions come with designated itineraries and guides, so not having Korean-language services at overseas museums may previously have not been that big a deal.

Left: A Korean Air flight transported the Uigwe books from the Joseon Dynasty (1392-1910) in 2011. The books were taken to France in 1866. [JoongAng Ilbo] Right: Chairman and CEO of Korean Air Cho Yang-ho, right, shakes hands with the former Musee de Louvre director in 2008 after signing a deal to provide Korean-language services at the museum. Provided by the company

But today, Koreans like to travel more freely, without a specific itinerary or guide designated through an agency.

According to a survey of some 1,000 Koreans in their 20s, 30s and 40s conducted by online tour company Expedia last month, almost seven out of 10 people said they prefer independent travel or “airtel” packages that come with just a flight and a hotel over package tours.

Auction, an online marketplace, said last month that 75 percent of trips sold on its website between July and Oct. 24 were independent trips or airtels, whereas the rest were package tours. Its sales of package tours numbered 30 percent in the same period last year.

Against this backdrop, expanding the Korean-language services at overseas museums is necessary and timely. Last year, actress Song Hye-gyo took note of the issue and made donations to the cause.

According to Korean Air officials, the company’s active and steady sponsorship of Korean-language services at overseas museums was possible because Cho Yang-ho, the chairman and CEO of Korean Air, is committed to sponsoring culture and art.

Jang Seon-wook, one of the publicists for the airline, told the Korea JoongAng Daily that Cho hopes that Koreans “will listen to the commentaries on masterpieces kept at world-renowned museums, get a profound understanding and enjoy their visit.” 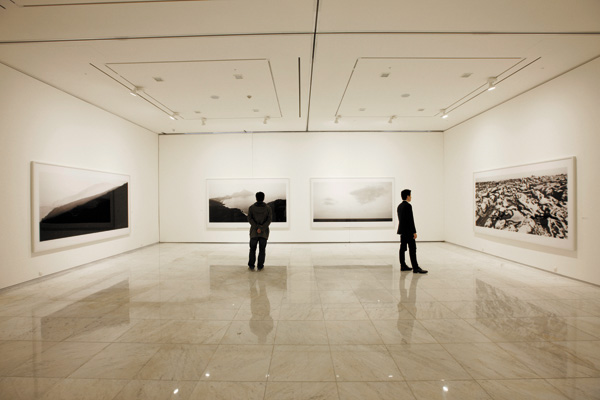 While backpacking Europe when he was a student, Cho saw that Korean-language audio guides were not available at any of the renowned museums. He felt that this was a pity since many Koreans visit them.

Cho is also the CEO and chairman of Hanjin Group, Korea’s transportation conglomerate with 48 affiliates that specialize in aviation, maritime and ground transportation. As the eldest son of the group’s founder, Cho Choong-hoon, he joined Korean Air in 1974 as a manager in the Americas Regional Headquarters, and in 1999 assumed the role of the chairman and CEO.

As 2009 marked the 40th year since the foundation of Korean Air, plus 10 years since Cho took the airline’s helm, he concluded deals to sponsor Korean-language services with what the company labeled the top three museums in the world: the Louvre in Paris, the Hermitage Museum in St. Petersburg, Russia, and the British Museum in London.

In the Louvre’s case, about 333,800 people used the Korean-language audio guide in 2008, its first year of service. A total 8.5 million overseas travelers visited the museum during this period.

Korean Air emphasized that in terms of the Hermitage Museum, Korean was the seventh language to be added to its audio guides and the first Asian language. Officials said the inclusion of Korean is rather meaningful considering its number of Japanese or Chinese visitors outnumber Korean visitors.

Cho believes that passenger and freight transportation and cultural and arts exchanges can be linked with one another, the officials of the company say, and hopes Koreans’ pride in their country and heritage will strengthen through such programs.

Korean Air also has strong ties with the National Museum of Korea.

This June, the company signed an agreement with the museum, promising to support its attempts to promote Korean cultural heritage and history. Under the agreement, Korean Air will sponsor eight exhibitions at museums at home and abroad for the next two years, by offering discounts on the transportation of artifacts, for example.

“Korean Air’s support of our museum goes back to 2012,” said Lee Hyun-joo, a publicist at the National Museum of Korea. “The latest agreement is a renewal of the former agreement reached in 2012.”

In December, the National Museum of Korea, located in Yongsan District, central Seoul, is planning the last large-scale special exhibition on Pompeii, in which about 150 artifacts from Italy will be displayed. Museum officials confirmed that they will be flown in on a Korean Air flight.

The Pompeii exhibition, set to start on Dec. 9, is part of the museum’s series of exhibitions highlighting some of the world’s best-known civilizations. The run has been ongoing since 2008 and included “Glory of Persia” in 2008, “Pharaohs and Mummies” in 2009, “The Civilizations of Turkey: Emperors in Istanbul” in 2012 and “Maya 2012,” also in 2012.

Director Kim Young-na told reporters that she believes “the more you know about the world, the better you get to know your own country,” affirming her plans to host more exhibitions of the same sort.

The National Museum of Korea also plans to hold two exhibitions in France next year to mark the 130th anniversary of diplomatic relations between the countries. Given these circumstances, Korean Air’s sponsorship will likely be very effective for the museum.

Korean Air officials weren’t able to confirm if the company will also sponsor the exhibitions in France next year, though.

“Korean Air has had extensive experience in air cargo, and its know-how has been recognized globally. That is why it is helping with repatriating cultural properties and transporting artworks when there are calls for help.”

When the Uigwe books that depict and record royal ceremonies and rituals from the Joseon Dynasty (1392-1910) returned home in 2011 after 145 years in France, they came on a Korean Air flight. The publications, which made it onto Unesco’s Memory of the World Register, were taken during Byeongin-yango, the French invasion of Korea in 1866. After years of negotiating with France, Korea was finally able to repatriate the books in stages over the course of a year.

Also in 2006, when Korea repatriated the 1709 Bukgwandaecheopbi monument from Japan, Korean Air brought it home. The 1.87-meter (6.13-foot) stone statue was erected to commemorate the Korean militia’s victory during the Japanese invasion, known here as the Imjin War (1592-98), but was taken to Japan in 1905.

Another area that Korean Air has been sponsoring steadily is photography, which Chairman Cho himself is also known to be interested in.

Since 2009, the company has been supporting photographers in the areas of art, commercials and documentary, among others, by awarding the Ilwoo Photography Award. Through the prize, the company supports the exhibitions and publications of three photographers, with up to 30 million won ($27,390) in support for each.

Also in 2010, Korean Air opened the Ilwoo Space exhibition hall on the first floor of its headquarters in Seosomun District, central Seoul. Currently, an exhibition titled “The Roots of Coincidence” is underway, exclusively featuring the work of photographer Jeong Kyung-ja, one of last year’s winners of the Ilwoo Photography Award.

Korean Air also selects travel shots by amateur photographers and gives an award to the winner, but the prize has been embroiled in controversy for several years now. In 2011, the company used the winning image from the previous year in a commercial - a photo of Solseom Island in Samcheok, Gangwon.

But internationally renowned British-American photographer Michael Kenna filed a copyright infringement lawsuit against Korean Air, stating that the photo was similar to his work “Pine Trees,” which taken at the same location and features a similar composition.

This March, a Korean court ruled against the plaintiff, but he appealed and a second trial is underway.