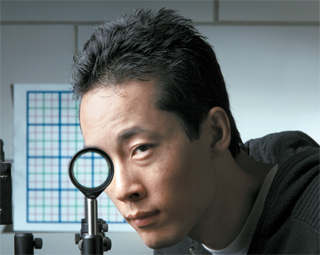 
A Korean-American physicist made headlines in late September when he proved that Harry Potter’s invisibility cloak can exist in the real world.

Joseph Choi, a doctorate student at the University of Rochester in New York who created the cloaking lens, will be in Korea on Thursday to tell his behind-the-research story at the Tech Plus Forum 2014 at Konkuk University.

In a recent email interview with the JoongAng Ilbo, Choi gave a sneak peak into “Rochester’s cloak,” which he jointly developed with his academic adviser Prof. John Howell.

Choi explained that the cloak is actually a special lens that makes objects and people seem to vanish from sight.

Choi added that the cloaking lens is simply made by stacking four regular lenses, and if the cloak is commercialized, it would cost about 1 million won ($903).

“In the past, there were many scientists who tried to create an invisibility cloak,” Choi said in the interview. “Some tried to trick people by adding pieces of prerecorded videos, and some tried to re-enact the same effect by refracting light through a lens made with new materials.”

He explained that the previous attempts were not successful because the new material was too expensive to produce and the invisibility effect was only achieved if it was viewed from certain angles.

“The Rochester’s cloak can make all objects standing behind it invisible, regardless of the direction a person is looking in, and it works under all colors of lights,” he wrote.

Choi said that the lens works using the basic principle of light refraction.

“While experimenting, I accidently happened to stack four of the lenses,” he said. “Surprisingly, all objects [in front of the lenses] went invisible. Light was refracted when it went through the four layers of lenses and made the surroundings seem completely empty from all angles.”

Once commercialized, he said the cloaking lens could for instance be produced in a large size and be placed on the wall of a building, which would save energy during the day because it would seem as if there was no concrete wall.

“If technology develops to manufacture the lens to be flexible and light enough, then a person may wear it like Harry Potter,” he said.

Howell raised the idea at first and Choi was charge of developing specific methods to produce the lens easily and for cheap. The mix of the two scholars’ strengths made it possible, Choi said.

In addition to Choi, scientists and technology experts including U.S.-based physiologist Robert Root-Bernstein and Huawei Korea’s Chief Technology Officer Jack Guo will speak at the forum, hosted by the JoongAng Ilbo, the Ministry of Trade, Industry and Energy and the Korea Institute for the Advancement of Technology. The forum will focus on high technology in daily life.

The software, which is being shown for the first time in Korea, is designed to help physicians practice operations using augmented reality technology.