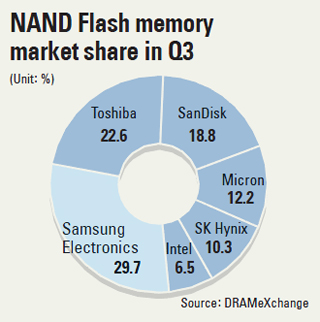 Samsung Electronics’ global share in the NAND flash memory chip market in the third quarter fell below 30 percent for the first time in 30 months.

According to data on Wednesday from DRAMeXchange, a research division of the Taiwan-based market intelligence firm TrendForce, Korea’s largest electronics company posted $2.45 billion in NAND flash revenue from July through September, up 8.2 percent from the previous quarter.

Japan’s Toshiba, which first developed NAND flash technology in 1987, was a runner-up with a market share of 22.6 percent. The gap between Samsung and Toshiba in the second quarter was 10.3 percentage points, but was cut to 7.1 percentage points. The company’s NAND flash revenue jumped 23.7 percent quarter-to-quarter, thanks to rising demand in China, according to DRAMeXchange.

U.S.-based manufacturer of semiconductor memory chips SanDisk was No. 3 and Micron was No. 4, followed by Korea’s SK Hynix.

Industry observers said the rise of other chipmakers is due to strong demand for the iPhone 6. According to a report from Credit Suisse last month, Toshiba is the sole supplier of 128 gigabyte (GB) NAND, while SK Hynix, Toshiba and SanDisk supply 64 GB NAND. Hynix also supplies 16 GB NAND to Apple.