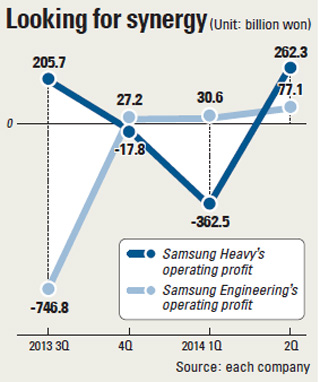 The merger of the world’s third-largest shipbuilder Samsung Heavy Industries with its affiliate Samsung Engineering hit an iceberg after some powerful shareholders including the National Pension Service said the deal wasn’t good enough for them.

The shipbuilding arm of Samsung Group said through a press release Wednesday that it annulled the contract to absorb Samsung Engineering due to higher-than-expected share buyback costs.

“Shareholders who were opposed to the merger exercised their appraisal right on Monday and the cost of buying back shares exceeded the limit set by the deal,” the shipbuilder said.

An appraisal right is provided to shareholders to allow them to dissent from extraordinary corporate actions that adversely impact their interests.

The shipbuilder was going to issue 236 new shares for every 100 Samsung Engineering shares.

But the merger plan ran aground as shareholders asked the companies to instead buy back their shares at 65,439 won ($59.14) per share for the engineering company and 27,003 won per share for the shipbuilder, which would have cost the companies a total of 1.63 trillion won to finalize the merger, about 300 billion won higher than they could afford.

The two companies had stated that they would back out of the deal if the buyback cost exceeded 1.33 trillion won when they made the merger contract in September.

Shares of the shipbuilder closed at 23,450 won per share on Wednesday, down 6.39 percent from the last session. Shares of the engineering company closed at 53,600 won, down 9.31 percent.

“If we push ahead to absorb Samsung Engineering, it will eventually cause serious damage to our shareholders,” a spokesman of the shipbuilder said. “We decided to respect the decision that the shareholders have made.”

Industry insiders said the rebellion was led by the National Pension Service (NPS), a major shareholder of both the shipbuilder and the engineering company. It holds 4.99 percent of the former and 5.24 percent of the latter.

“We didn’t oppose the merger plan itself,” said a spokesman of the NPS. “We just exercised our right and we think it didn’t impact other shareholders because we made the move right before the deadline to exercise the appraisal right [on Monday].”

The companies announced the merger in late October as most shareholders voted in favor of the merger, but the NPS abstained at the time.

“The stock prices for the two companies have not improved as much as the shareholders expected,” an industry spokesman said. “They want to wait until the share price rises to an appropriate level so they can recoup their losses over a year.”

The failure of the merger is expected to affect Samsung Group’s restructuring plan, which was launched in the second half of last year.

The group has merged Samsung SNS with Samsung SDS while handing over Cheil Industries’ fashion business to Samsung Everland.

The merger of the shipbuilder and the engineering company was considered a necessary restructuring plan in heavy industry and construction, which was to lead to a merger of Samsung C&T Corporation and Cheil Industries.