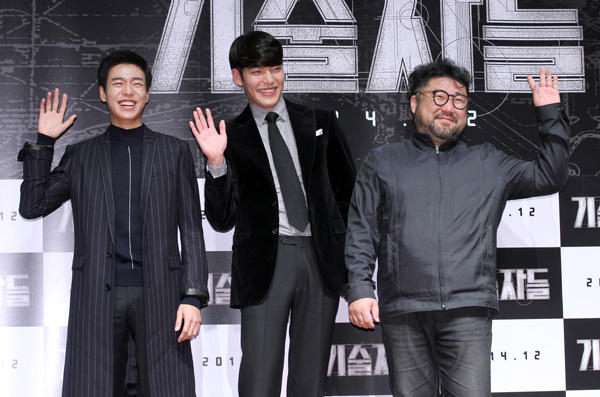 Kim Hong-sun, who made a spectacular directorial debut with “Traffickers” in 2012, is returning with a new thriller, “Criminal Designer.”

The upcoming movie has attracted attention because of its star-studded cast, featuring Kim Woo-bin and Lee Hyun-woo as the lead roles.

Kim Woo-bin, who has won immense popularity since starring in the SBS drama “The Heirs,” will be making his movie debut with this film.

“I loved the script and the fellow actors such as Kim Young-chul and Ko Chang-suk,” Kim Woo-bin said at a press conference held Tuesday at Lotte Cinema in Gwangjin District, eastern Seoul.

“I thought it would be a very great opportunity to learn acting. I was also a big fan of filmmaker Kim Hong-sun since he was an assistant director on ‘Rough Cut.’?”

Lee of “Secretly Greatly” shed his innocent image in this film by acting as a rugged and masculine expert hacker.

“He [Jong-bae] is very tough and I tried so hard to change my image. I had to curse and spit in the street. I even had to smoke,” said Lee.

The filmmaker said that the movie put more weight on amusing the audience compared to his first work.

“Another point about this movie is that there is a lot of chemistry between the characters,” said Kim Hong-sun.

“It means the characters are perfectly matched. You’ll know when you see the movie.”

The film opens in local theaters on Dec. 24.