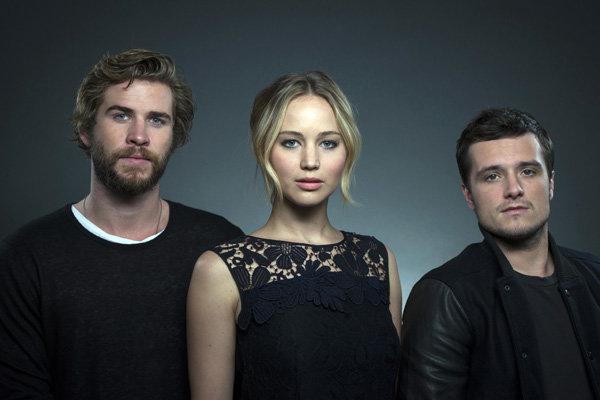 NEW YORK - Sitting down to interview Jennifer Lawrence, Josh Hutcherson and Liam Hemsworth, stars of the blockbuster “Hunger Games” franchise, feels a bit like hanging out with three siblings.

While Hutcherson ponders a question, Lawrence and Hemsworth are surreptitiously playing a game of hand-slap, Lawrence pulling her hand free just in time. When one of the guys says reflectively, “Maybe I was just an idiot,” Lawrence pipes up: “Yes, you ARE an idiot!” There are giggles, and a totally inside joke involving the phrase “My ears hurt,” spoken in a baby voice. (Don’t ask.)

“I met my best friends in the world on this movie,” Lawrence says, turning serious, of Hutcherson and Hemsworth. “We love each other. They’re as close to me as my family, and in some ways they ARE my family.”

Lawrence, who plays Katniss Everdeen for the third time in “The Hunger Games: Mockingjay: Part 1,” opening Thursday in Korea and Friday in the United States, is known for being a straight shooter - and not just with a bow and arrow. And so when she talks about her co-stars, it sounds refreshingly nothing like canned Hollywood-speak, in which everyone professes how it was SO great working with everyone else.

Instead, the 24-year-old Oscar winner explains how she, Hutcherson and Hemsworth (22 and 24, respectively) grew up together on set over the past several years - and became famous together, though Lawrence’s star has risen the fastest.

“We all have the actor thing in common where we left home very early - I left home when I was 14,” Lawrence says. “And our lives changed together in a way that nobody else in the whole world understands.”

In fact, she says, just the night before, the trio attended a dinner - exhausted - and sat for the first half entirely silent, like families sometimes do. “People were thinking, they must not really like each other,” she says. Chuckles Hutcherson: “Yeah, they’re thinking it’s all an act!” Adds Hemsworth: “You’ve got to be really close to not talk at all.”

Promoting the third film in the Suzanne Collins trilogy - filmmakers have split “Mockingjay” in two parts - has brought back familiar questions about parallels between the characters and the actors who play them. Katniss and Peeta Mellark (Hutcherson) are both thrust into dizzying fame in the first “Hunger Games” when they’re chosen to represent District 12 in the fight-to-the-death spectacle forced on them by the Capitol, ruled by shadowy President Snow (Donald Sutherland). In the third movie, along with Gale (Hemsworth), they each figure in different ways in the rebellion spreading through the country of Panem.

“I always get kind of nervous when people make parallels,” says Lawrence. “[Katniss] led a rebellion that changed the world, and I’m just an actor telling people I need more lipstick or whatever.”

She does, though, understand why people latch onto the “reluctant fame” idea, since she herself initially hesitated before accepting the role that catapulted her to global fame.

“We all had an idea of how big this was going to be, which is why I took a few days before I said yes, and really thought about what I wanted,” Lawrence says. “Saying yes to this was going to completely change my life.”

Hutcherson says he was oblivious. “I had to say I didn’t expect any of it,” he says of sudden stardom.

“You’re not as paranoid and neurotic as me,” Lawrence quips.

Lawrence, who has spoken bluntly and forcefully about privacy concerns, feels her co-stars need to be more security-conscious. “I recently changed my number and texted them, ‘Hi boys,’ and they answered back blah blah and didn’t even ask a security question!’” she says, in mock disapproval.

“Mockingjay,” directed by Francis Lawrence, brings back most of the starry supporting cast.