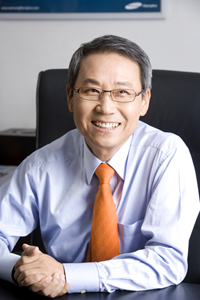 Lee Geun-myeon, named Tuesday as minister of personnel management, is the only figure from the private sector among 11 new officials to assume high-ranking government posts.

Attention is now being focused on how the 62-year-old Lee, a human resources expert at Samsung for over three decades, will try to slash red tape in the nation’s bureaucratic community - with no experience working in government.

Lee will also spearhead the government’s much-disputed drive to reform the pension system for civil servants. His new ministry, to be launched Wednesday, will operate under the Prime Minister’s Office.

Having served as head of human resources overseeing the information and communication department at Samsung Electronics, Lee has excellent experience and expertise in human resources management, said the presidential office in a briefing Tuesday. Lee is also an adviser to the private Korea Academy of Management.

“Based on his experience at a private corporation, he is seen as an appropriate figure to spearhead innovation of public personnel management from a fresh perspective,” said Min Kyung-wook, a presidential spokesman.

A graduate of the chemical engineering department at Sungkunkwan University in Seoul, the Seoul native joined Samsung in 1976 and played a key role in establishing Samsung Corning Precision Materials, Samsung Advanced Institute of Technology and Samsung SDS. He assumed the CEO post at Samsung Fiberoptics in 2009 after spending over a decade at Samsung Electronics, where he adopted a horizontal and flexible hierarchy and annual salary system based on performance. The fiber optics arm was acquired by Samsung Electronics in December 2012 and he has since served as a management adviser there.

Lee’s HR expertise garnered global recognition after he was listed in the 2011 edition of “Marquis Who’s Who in the World.” Lee also authored a Korean book entitled “An Overnight Guide to 55 Interview Tips” in 2009.

Sources say Lee was spotted by then-presidential candidate Park Geun-hye just before the 2012 presidential election as he was actively engaged in the ruling Saenuri Party’s “Public Happiness Promotion Committee.”