Park assures farmers over effect of FTA with China

Park assures farmers over effect of FTA with China 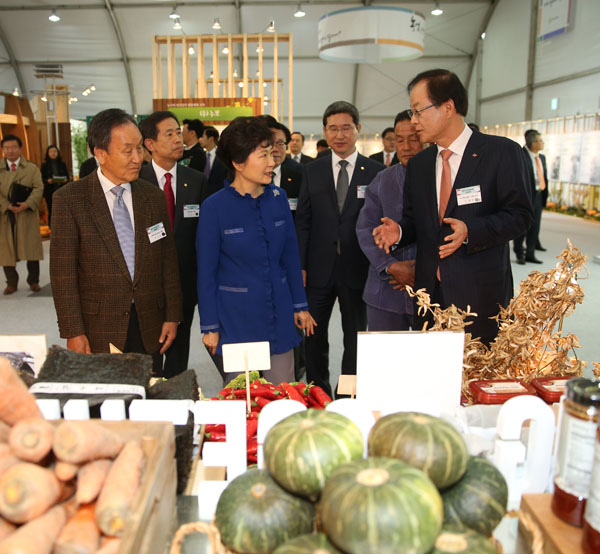 President Park Geun-hye listens to Kim Chul-ha, CEO of CJ Cheiljedang, right, who explains about seed development before she joined a discussion on agriculture at Anseong Farmland in Gyeonggi on Wednesday. [Joint Press Corps]

President Park Geun-hye pledged in a meeting with farmers on Wednesday to “minimize” the economic impact they will feel from the recently signed free trade deal with China.

Visiting Anseong Farmland, an agricultural theme park in Gyeonggi operated by the National Agricultural Cooperatives Federation, the president hosted a discussion on agriculture as a future growth driver for the Korean economy. The theme park’s predecessor was Handok Farm, which her father President Park Chung Hee established in 1969 after borrowing money from West Germany “to let Koreans drink their fill of milk.”

“The government has elicited [from the negotiations] the best result to protect domestic agriculture taking into consideration the farmers’ concerns,” she said. She noted that the agreement with China excludes major agricultural and stockbreeding products, including rice.

Korea and China reached a bilateral free trade deal on Nov. 10, two and half years after negotiations first started, while Park was visiting Beijing for the Asia-Pacific Economic Cooperation forum.

She went on to praise the value of agriculture in the presence of 400 farmers, agricultural experts and businessmen.

“I have been certain for a long time that agriculture is a future growth driver, and that we all need a paradigm shift in the perception of agriculture and farming,” she said, “What’s most important is technology and creative ideas.”

Whereas a female pig can produce 25 piglets per year in advanced farming countries, only 17 are possible in Korea, she said. The volume of tomato production per unit of area in Korea is half that of the Netherlands, she continued. These kind of gaps can be overcome through cutting-edge science and technologies, she said.

The president, known as a staunch believer in manufacturing and exports as propellers of economic growth, also said that Korean farmers should explore exports with more confidence, especially to China and Southeast Asia. She cited the example of Korea Agro-Fisheries and Food Trade Corporation signing of a contract with Alibaba, the world’s largest e-commerce company, in October to sell Korean products through China’s local business-to-business retail chains.

“Expanding a bridgehead online and transforming Korean farm goods into cultural products combined with hallyu [the Korean wave of cultural exports] would give Korea a competitive edge in China,” she said.