Rep says leaflets are for publicity

Rep says leaflets are for publicity 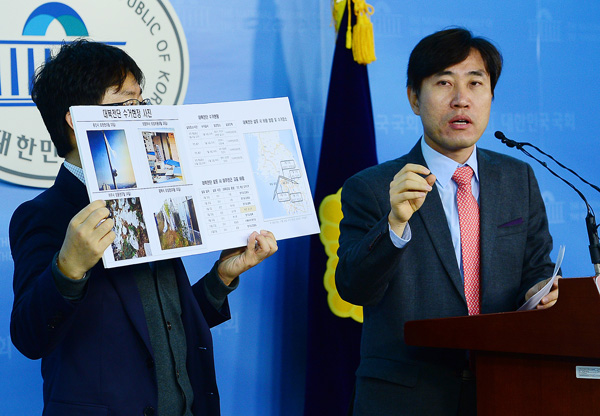 Rep. Ha Tae-kyung of the Saenuri displays photos of propaganda leaflets critical of North Korean that fell to the South Korean side during a press briefing Tuesday at the National Assembly. Calling the campaign a publicity stunt, Ha urged campaign organizers to stop disclosing the launches to the public and the press. [NEWS1]

Rep. Ha Tae-kyung of the Saenuri Party lashed out at an anti-North Korea civic group behind the propaganda leaflets and balloons that have become a source of inter-Korean tension, claiming that many of the balloons never make it across the border and the group is mainly interested in raising donations for itself.

The first term lawmaker’s criticism Tuesday of the Fighters For Free North Korea and defector-turned-activist Park Sang-hak, who has led the leaflet campaign since 2004, comes after Pyongyang’s repeated demands to Seoul to stop the campaign, which is highly critical of the Kim Jong-un regime and its human rights violations.

Standing before reporters at the National Assembly, Ha said Park’s group carried out balloon launchings seven times this year with press crews covering the events. Ha contended that on six out of seven occasions, the group launched the balloons when the wind was blowing westward, which prevented them from reaching the North.

“We requested wind data from the Korea Meteorological Administration from seven dates this year when the civic group launched balloons,” Ha said. “Of those seven days, there were six days that the currents blew in a way that prevented the leaflets from reaching the North.”

The lawmaker accused Park’s group of using the leaflets and balloons as mere publicity stunts to drive donation campaigns.

Saying wind direction forecasts are available three days in advance, Ha said Park’s organization must have known of the unfavorable wind conditions but ignored the forecasts for the sake of publicity.

The lawmaker also pointed out that balloons are made more vulnerable to bursting if slogans are written on them because the surface of a balloon gets damaged during the writing. The group’s balloons are inscribed with messages critical of the Pyongyang regime. Ha claimed the group cared more about showing off to media on the south side of the border than actually getting the balloons and leaflets across the border.

“I urge civic groups engaged in the leaflet campaign to promise that they will never disclose their launchings to the public in advance, as doing so only adds tension to inter-Korea relations and does nothing to deliver information to North Koreans.”

Campaign organizer Park said in an interview with the Korea JoongAng Daily last month that his group invites the press to around three out of every 10 launchings with the purpose of attracting donations to the campaign from individuals.

A high-level negotiation between government officials from Seoul and Pyongyang was scuppered after Pyongyang told the Park Geun-hye administration to stop the balloon campaign, saying it was tantamount to a declaration of war.