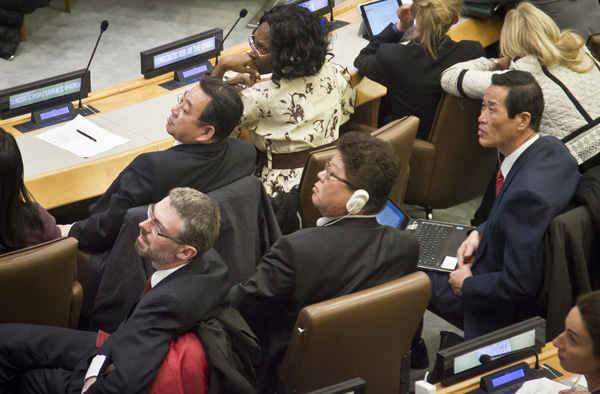 The international community has taken its strongest step yet to hold North Korea accountable for human rights abuses by passing a resolution at a key United Nations committee that included a possible referral of the country and its leader to an international tribunal.

Following the vote, an envoy from Pyongyang furiously condemned the resolution and threatened further nuclear tests.

The resolution, which urged the UN Security Council to refer those responsible for brutal human rights abuses in North Korea to the International Criminal Court (ICC), was passed by the Third Committee of the United Nations General Assembly by an overwhelming majority on Tuesday, New York time. The committee handles social, humanitarian and human rights issues.

The nonbinding resolution, which also included “targeted sanctions” to punish the regime, will go to the General Assembly for a vote next month.

At the committee vote, 111 countries supported the resolution, 19 voted against it and 55 abstained.

Since 2005, it has been an annual ritual for the United Nations General Assembly to adopt a North Korea human rights resolution. This year’s resolution, however, is by far the strongest effort by the international community to punish the North Korean leadership for systemic abuses of human rights.

The draft, co-sponsored by 62 countries including the United States, Japan, South Korea and those in the European Union, was inspired by a landmark report published in February by the UN Commission of Inquiry on Human Rights in the Democratic People’s Republic of Korea, the North’s formal name. An array of crimes against humanity by the North Korean regime was detailed in the report.

It also included a letter to the North’s leader Kim Jong-un saying that the commission would refer the North’s rights situation to the ICC “to render accountable all those, including possibly yourself, who may be responsible for the crimes against humanity referred to in this letter and in the commission’s report.”

The resolution passed by the committee Tuesday did not single out the North Korean leader by name, but it said the commission’s report led the member countries to believe that crimes against humanity have been committed under policies “established at the highest level of the State for decades.”

The resolution also called for targeted sanctions against those who appeared to be the most responsible.

Because China and Russia, permanent members of the Security Council, have made clear they will veto the resolution, it is unlikely that the North and its leader will actually be referred to the ICC. North Korean diplomats worked hard to avoid their worst nightmare: that their young ruler, who inherited power after his father’s death in 2011, would face an international prosecution.

After the committee vote, Choe Myong-nam, North Korea’s Foreign Ministry representative to the United Nations on human rights issues, threatened more nuclear tests to defend the country from the United States and its allies’ hostility.

“The outrageous and unreasonable human rights campaign staged by the United States and its followers in their attempts to eliminate the state and social system of [North Korea] is compelling us not to refrain any further from conducting nuclear tests,” he said.

North Korea aggressively stepped up its diplomacy over the recent months. Pyongyang sent Foreign Minister Ri Su-yong to the UN General Assembly in September for the first time in 15 years. Ri complained that the human rights report was an act of hostility orchestrated by the United States.

The North also organized an event at the United Nations in October to explain its rights situation and also hinted at the possibility of accepting a special UN investigator to visit the country for the first time. While North Korea’s traditional allies including China and Russia voted against the resolution at the committee level, only a handful of countries opposed it.

Some members of the Non-Aligned Movement were expected to vote against the resolution in reflection of their friendship with the North. But they turned their backs on Pyongyang.

Among the 185 countries that participated in the voting, only 19 voted against it. They were Belarus, Bolivia, China, Cuba, Ecuador, Egypt, Iran, Laos, Myanmar, Oman, Russia, Sri Lanka, Sudan, Syria, Uzbekistan, Venezuela, Vietnam, Zimbabwe and North Korea itself.

Of the 108 Non-Aligned Movement countries that cast votes, 42 supported the resolution while 49 abstained and 17 objected.