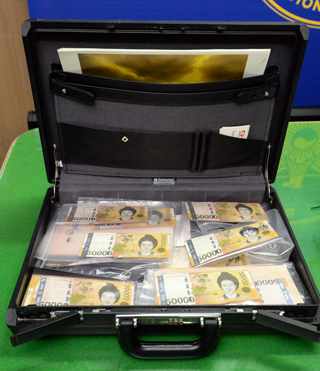 The National Police Agency showed a briefcase stacked with cash confiscated in a raid on Kepco KDN, an IT affiliate of the Korea Electric Power Corporation. [NEWS1]

Police are expanding their investigation into allegations that four National Assembly members were lobbied by an affiliate of the state-owned electric company and may have received up to 27 million won ($24,570) each.

According to a special investigative team at the National Police Agency Tuesday, Kepco KDN, an IT affiliate of the state-run Korea Electric Power Corporation (Kepco), made contributions to four lawmakers with the clear intention of buying their influence to change a revision to the software industry law.

The company allegedly wanted to ensure that it maintained its share of the market.

Lawmakers Chun Soon-ok, Kim Hyun-mi and Hong Il-pyo of the opposition New Politics Alliance for Democracy (NPAD) and Yeo Sang-kyu of the ruling Saenuri Party are implicated in the scandal, the police said. The authorities said the company faced a crisis in November 2012 when a revision to the software industry act was submitted to the parliament sponsored by Rep. Chun of the NPAD, which would ban large companies such as Kepco KDN from bidding to develop software for state-run companies such as Kepco, KDN’s main client.

The police said the former president of Kepco KDN instructed 568 of his employees to make individual 100,000 won donations to each of the four lawmakers.

The police said each of the four lawmakers received donations from the employees ranging from 10 million to 18 million won. Chun allegedly received 18 million in donations.

The police also suspect the company’s purchase of 300 copies of a book written by Chun, spending 9 million won, in June 2013 was a reward for the revision of the bill.

While no indictments have been filed, the police booked the former Kepco KDN president and another senior executive for investigation of violation of the political funding law.

The police said it will start questioning the suspected lawmakers and their aides as early as next week.