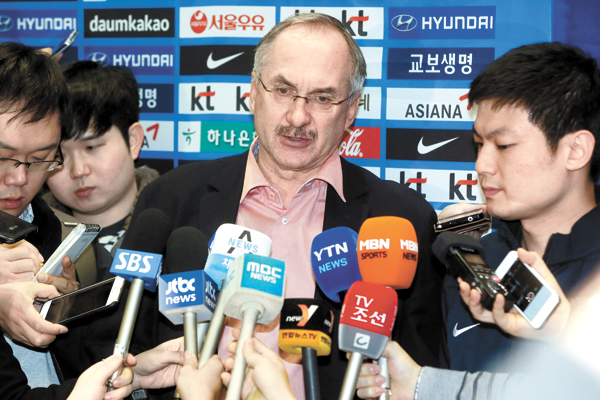 Uli Stielike, the national football team manager, talks to the press at Incheon International Airport on Thursday after the team returned from playing two matches in the Middle East. [NEWS1]


Football is like a machine with two large wheels: offense and defense. If the size of the wheels differs, the match doesn’t go well. In the Korean national team’s case, the offense looks miniscule compared to the defense.

The disparity was apparent in the friendlies against Jordan last Friday and Iran on Tuesday, but it’s not the fault of the new manager, Uli Stielike. It’s a problem that has gone unsolved for many years.

The problem was obvious after the team lost 1-0 to Iran. Some fans blamed the referee, who did not call a foul when Sardar Azmoun headed the ball in and collided with Korean goalie Kim Jin-hyeon, and others say Iranian players intentionally wasted time by diving and faking injuries.

But the real problem was that Korea’s attackers couldn’t score. Iran’s defense was dense, with narrow gaps between each defender to prevent through passes, and Korea could not get past.

Korea’s defense wasn’t strong enough to stop Iran’s counterattacks and they eventually conceded the goal to Azmoun in the 82nd. It’s a similar story for Korea’s past three meetings with Iran, all of which the Taegeuk Warriors lost 1-0. The team has never won a match against Iran in Tehran.

Stielike tried two of his best attackers on Tuesday: Bayer Leverkusen’s striker Son Heung-min and Al Shabab striker Park Chu-young. Son, who only played for about 20 minutes against Jordan, was sent out to break down the Iranian defense with his quick moves. He took six shots, the most of any player in that match, but failed to put any in the goal.

The German manager put Park on the field in the 73rd instead of Lee Keun-ho, but he did not even get a chance on goal, and was isolated by the Iran defense. On the Middle East trip, shadow striker Han Kyo-won of the Jeonbuk Hyundai Motors was the only Korean player to score.

The situation wasn’t much better under previous managers. Cho Kwang-rae, who took over after the 2010 South Africa World Cup, had only 1.81 goals per match, which dropped to 1.64 under the next manager, Choi Kang-hee. It declined even further to 0.94 under Hong Myung-bo, partially because the team played many strong opponents in preparation for the 2014 Brazil World Cup, but also because the offense was weak.

One reason for the lower number of goals per match is that in many nations, football is becoming more defensive, but it is also because Korea has had no outstanding goal-scorers recently besides Ahn Jung-hwan, Lee Dong-gook and Park Chu-young. Park has deteriorated and he has seen little action with his club teams in recent years, but he is back on the national team because all the other strikers are out with injuries.

South Korea wants to win the Asian Cup, which will be held in January in Australia, for the first time in 55 years, but Stielike is not sure if his No. 1 and No. 2 striking options, Lee Dong-gook and Kim Shin-wook, will fully recover from their injuries in time.

It is likely that he will take Lee Keun-ho of El Jaish, Cho Young-cheol of Qatar SC or Ji Dong-won of Borussia Dortmund, but an Asian Cup win will be impossible if the Taegeuk Warriors fail to create a big enough offense wheel.