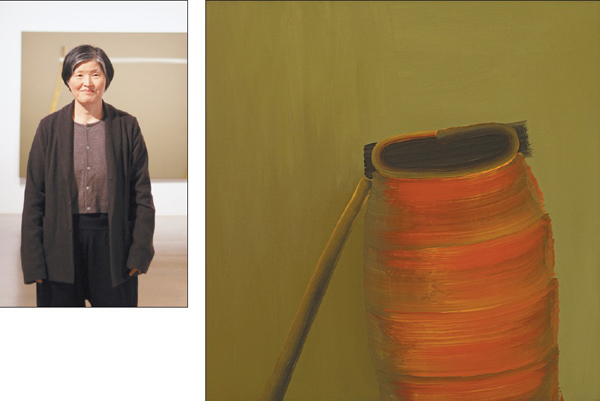 Korean-German artist Song Hyun-sook poses in front of her painting “Five Strokes” at Hakgojae Gallery in central Seoul. “Six Brushstrokes,” right, a tempera painting from 2013, is also part of her solo show at the gallery. Provided by the gallery

Two major galleries in the art zone east of Gyeongbok Palace in central Seoul are holding solo shows by two Korean-born artists based in Europe who create abstract paintings inspired by brush strokes in traditional East-Asian calligraphy and ink paintings.

Among them, Song Hyun-sook’s paintings, now on display at Hakgojae Gallery, have exciting, ambidextrous qualities. 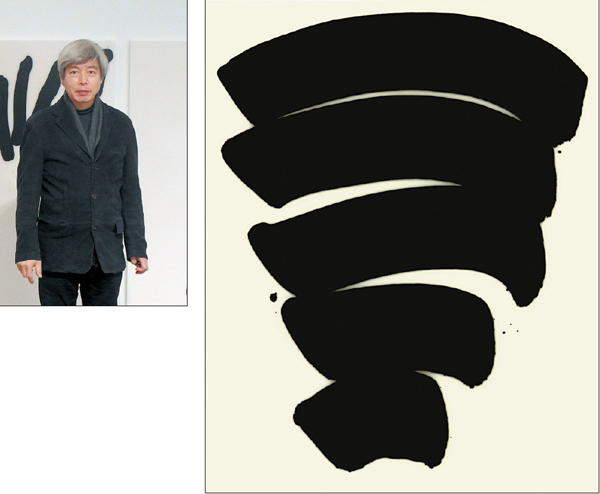 French-based Korean artist Lee Bae poses at Gallery Hyundai in central Seoul. “Untitled,” right, a charcoal black painting that Lee created this year, is one of 27 pieces featured in his solo show at the gallery. Provided by the gallery

Her pieces can look like figurative paintings that portray simple objects found in Korea’s old rural areas such as white hemp cloth pieces or earthenware. They can also appear similar to abstract paintings made of just a few brush strokes, which are in the bold, traditional East Asian style. And with the use of tempera on canvas, the paintings look like Western modern abstract art, too.

“I create my works so that they are seen in both ways - abstract and representational,” Song told the Korea JoongAng Daily at the show’s opening last week.

She was one of many Korean nurses who emigrated to West Germany in the 1960s and ’70s when the European country invited them as Gastarbeiter, or guest workers. She decided to be an artist while there and studied at the College of Fine Art in Hamburg.

Song still lives in the German city but is always interested in what is happening in Korea. Among the 16 works on display is a painting she created in homage to the victims of April’s Sewol ferry sinking tragedy. It is an abstract art piece with white brush strokes on a black background. But it can also appear as if it is a body covered in a white hemp cloth according to an old Korean burial custom and laid in the dark.

“For Hyun-sook, the act of painting is physical, mental, and spiritual,” Lawrence Rinder, art critic and director of the University of California, Berkeley Art Museum and Pacific Film Archive, wrote in a note for the show.

“She cultivates a state of meditative calm and concentration, clear of excess thoughts and energy. The act of painting itself is carried out with intense bodily engagement. In her long, sinuous strokes one can see both the breadth of her reach and the pulse of her breath.”

The physical and spiritual qualities of brush strokes are also seen in Paris-based Korean artist Lee Bae’s latest paintings, which are on display at Gallery Hyundai, although his style is quite different from Song’s.

The black-and-white paintings seem to be in between East Asian calligraphy and Western abstract art. They have three layers: First, the artist draws lines in impromptu strokes with black charcoal on a white canvas. Then he covers the canvas with an acrylic medium. Next, over the translucent layer, he copies his first drawings very carefully.

“I copy my own drawings that I made on a whim, just like describing an apple - an object of nature,” the artist told the Korea JoongAng Daily at the gallery.

For more than 20 years, Lee, 58, has experimented with various styles, but his main material has been the same - charcoal.

“I took an interest in it when I went to Paris in the early 1990s. One day, close to my studio, I found a warehouse selling sacks of charcoal,” Lee said.

“The material reminded me of my origin - East Asia with its black ink paintings and calligraphy. It also turned out to be inexpensive.”

At first, Lee created pieces by attaching cut charcoal to canvas. Some of these early works are also on display at Gallery Hyundai.

“Later, I came to the idea that I depended too much on the materiality of charcoal and have decided to focus on bodily movement that can be expressed with it,” he said.