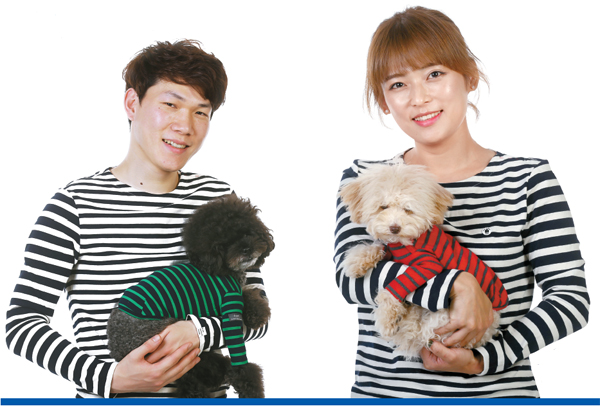 Shin Eun-gyo, left, and Kim Ji-ha raise poodles. When the new season comes, the couple buys similar clothes for themselves and their pooches. By Kim Sang-seon

A greyhound clad in a mustang yellow jacket was cuddled into the arms of its owner, Kim Seon-gyeong, and her twin sister Su-gyeong, who were both wearing clothes to match their beloved pooch at the K-Pet Fair held earlier this month at Kintex in Ilsan, Gyeonggi.

In the huge exhibition hall filled with various shops - from stores that sell pet food to others that offer leashes - most of the crowd flocked to the clothing section.

According to Cho Dong-ah, who promotes the annual three-day fair, only five dog fashion brands were available last year, but the number rose to 14 this year.

“As more people take an interest in the lifestyle of their pets, pet products are getting luxurious,” said Cho. 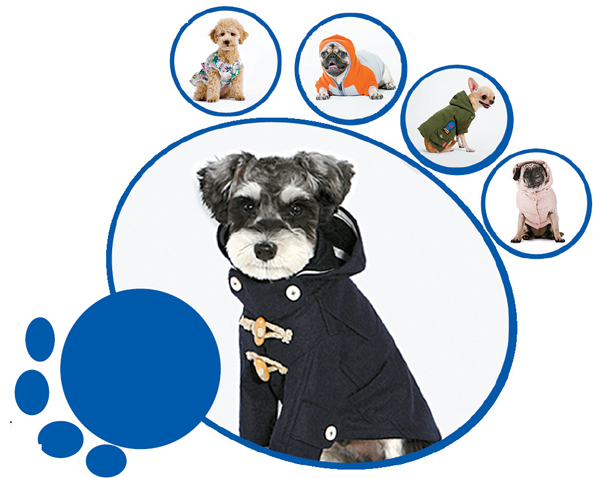 Clothes for furry creatures are as diverse as those for humans. The padded jacket worn by the pug in pink is by Louis Dog while the others are the creations of Dentists Appointment.

About 10 million Koreans now own pets. The country’s pet market has grown fast as a result, but the fashion side of it is still considered untapped.

Clothing for canines has been around for many years, but most outfits were made cheaply, using polyester and other inexpensive fabrics. The latest trend, however, is fancy garb for four-legged creatures. These outfits are more luxurious because they use better fabrics such as organic cotton and genuine leather.

“I started this business three years ago. When I started out, there were about three or four dog fashion brands,” said Kim Du-hyang, 35, the head of CosmoUnit, a fashion label that produces high-quality apparel for canines. “But I see more and more dog fashion brands. There are about 10 to 15 brands now.”

The fabrics and designs may be more chic, but the prices are much higher than the clothes that are available from street vendors or ordinary pet shops.

A fleece jacket for a small breed at CosmoUnit starts at 42,000 won ($38) while a cotton top starts at 27,000 won. Considering that a fleece jacket for men at Uniqlo is priced at 29,900 won, these palm-sized dog clothes are not cheap at all, but they sell well because they tickle the fancy of pet owners who want to doll up their animals in different ways. Since the market is becoming more lucrative, LG Fashion, a clothing affiliate of LG Group, also joined the bandwagon by launching the brand Hazzy Doggie in March.

After months of trial sales at selected shops and department stores stocking Hazzys, a clothing brand for men and women, LG Fashion saw a more than 30 percent sales increase in the retailers that had a line of dog clothing.

They launch between 10 and 30 styles twice a year, one collection for spring and summer and another for fall and winter. They also come out with various sizes.

The selections are as diverse as the styles on offer for two-legged customers. These dog fashion labels offer T-shirts, windbreakers, field jackets, padded jackets, cardigans and so on because pet owners in their 20s, 30s and 40s tend to dress their dogs in multiple layers of clothing.

“Before we work on a new collection, the first thing we do is check out the major collections from Milan, New York, London and Paris,” said Kim from CosmoUnit. “Pet owners want to dress their dogs up depending on their preferences. So it is always important to know what people of today want to wear,” Kim added.

Some say these dog clothes are way too over-priced, but people who work inside the industry say dog clothes can’t be any lower than they are now.

“In addition, it is hard to find factories that can elaborate on the cut and the sewing. Otherwise, the dog’s skin rubs against the seams and stitches.”

Baek Il-wun, an official from the canine fashion label Louis Dog, said, “We spend quite a lot on research and development because we work with cashmere and organic cotton, which are hard to develop into dog clothes.”

The upper-end dog clothing market is growing fast, but some are still doubtful about dressing up their pets.

“Animals have fur, and the fur is designed to control their temperature. They are dressed for their owners’ satisfaction,” said Kim, a company rank-and-file employee who wished to remain anonymous.

So what do professionals say about the issue?

“Koreans tend to raise small breeds inside their houses and they often get haircut services,” said Han Jin-su, a professor of veterinary medicine at Konkuk University. “If your dog has short hair, it is good for it to wear an outer coat during the winter.”

Moon Jae-bong, the head of Irion Animal Hospital, agreed that there are positive aspects to dressing up dogs. “Animals tend to scratch their scars, but you can prevent them from scratching if they wear clothes,” he said.

But Moon explained that people should not force their dogs to wear clothing.

“The skin around the armpit and groin areas can easily rub against seams,” he said. “If the dog doesn’t move after wearing a shirt or licks the fabric, it means that it feels uncomfortable.”

Canines wearing shoes is another controversial issue among pet owners.

“Going barefoot is much better for the health of humans and dogs, but dogs that are usually raised inside houses are likely to hurt their feet when they go outside without shoes. Dog shoes are sometimes necessary,” said Moon. “But the problem is that dog shoes don’t fit like a glove and can easily come off.”

Despite controversy over dog clothes and accessories, many pet owners want to dress their furry creatures up nicely because they think of their pets as part of their family.

“You don’t have to wear exactly the same outfits as your dog,” said Kim, the head of CosmoUnit. “Depending on your preferences, choose tops with stripes or floral patterns for you and your dog.”