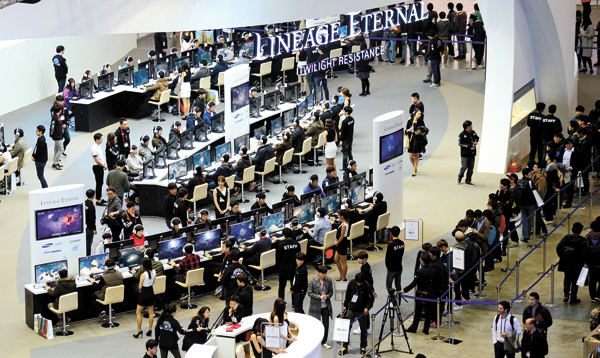 Visitors crowd into NCSoft’s booth Thursday on the opening day of G-Star 2014 at Bexco in Busan. According to the organizer, a record number of game companies are participating in the fourth-largest game exhibition. [NEWSIS]

G-Star 2014, the world’s fourth-largest game exhibition and Korea’s largest, kicked off on Thursday at Bexco in Busan under the slogan “Game Is Not Over.”

The 10th anniversary of the annual game show drew 617 game companies from 35 countries, a record number of participants.

“Thanks to the active participation of game companies this year, the registration finished earlier than expected,” said a spokesperson for the Korea Internet Digital Entertainment Association (K-Idea), an organizer of G-Star. “We will do our best to provide a more pleasant environment for visitors and a place for companies to trade freely until the end of the show.”

K-Idea predicted the number of visitors this year will exceed 200,000 and could surpass the Tokyo Game Show, the world’s third largest, which draws about 220,000 visitors.

NCSoft, a leading Korea-based online game company, is introducing Lineage Eternal and Project Hon. At the exhibition booth, about 100 people will be able to try their hand at Lineage Eternal.

For Project Hon, NCSoft prepared a CGV Screen X theater at the exhibition with 100 seats to show a Project Hon video.

Its local competitor and largest stakeholder, Nexon, is introducing four online games: Maple Story 2; Sudden Attack 2; first-person shooter (FPS) game Ghost in the Shell Online, which is based on a Japanese animation and 3-D cartoon rendering; and the role-playing game Peria Chronicles.

Smile Gate, another Korea-based online game company that has been growing rapidly overseas with its FPS game Cross Fire, is introducing Lost Ark, another role-playing game that has been in development for three years.

Ntreeve Soft, a subsidiary of NCSoft, is launching new games Project H2, Be the Summoner and Pangya Mobile.

NHN Entertainment will introduce different mobile games each day throughout G-Star, which runs through Sunday.

On the first day, it introduced Help Me Jack, a mobile action game, which combined adventure and lively hack and slash game style.

At the B2B Hall, which is exclusive for businesses and buyers, Naver, NHN, Nexon, Neowiz, Gamevil, Come2uS, Tencent and many others occupied the booths early on.

In the mobile game sector, in particular, Chinese companies such as Tencent, Alibaba and Baidu will likely compete over platforms.

Meanwhile, prior to the opening of G-Star 2014, the Busan mayor announced his opposition to game regulation.

“The game industry has boomed in Busan and it plays a significant role in leading the Korean economy,” said Suh Byung-soo. “In order for the success of G-Star 2014, I will spare no effort and support.

In addition, K-Idea said that in order for the G-Star to become a worldwide exhibition beyond Asia, it is signing a memorandum of understanding with one of the top three game shows, Gamescom, for strategic partnership.