Hyundai rolls out Sonata destined for China only

Hyundai rolls out Sonata destined for China only 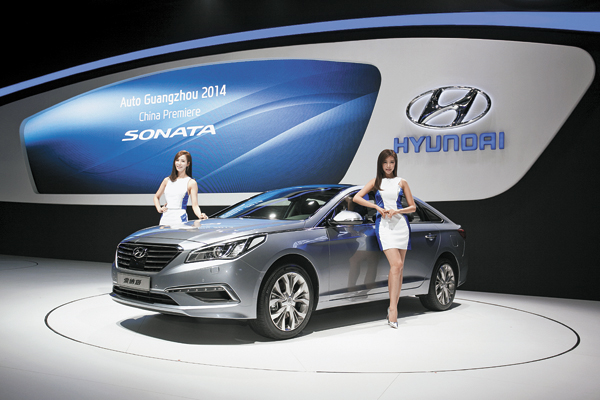 Hyundai Motor’s new 2015 Sonata sedan, which will be built and sold only in China, made its debut Thursday at the 12th China International Automobile Exhibition in Guangzhou, China. Provided by the company

Hyundai Motor introduced its new Sonata sedan, a model that will be built and sold only in China, at the 12th China International Automobile Exhibition in Guangzhou on Thursday.

The company said it will start producing its Chinese Sonata during the first half of next year.

While sales in Korea have been dwindling, Hyundai Motor and affiliate Kia Motors have enjoyed double-digit growth in China.

Hyundai said it sold about 92,400 cars in China last month, 16 percent more than a year ago. Kia Motors reported a 25 percent year-on-year increase to 57,000 units.

So far this year, the combined sales of Hyundai Motor and Kia Motors are 1.7 million units. The sales target for 2014 is two million.

“Lately, Hyundai has become one of the most popular auto brands in China, and we expect this new Sonata to improve our brand power in the country,” said Hyundai Vice Chairman Kim Tae-yoon. “We think the Sonata holds great appeal for buyers of midsize sedans.”

Along with the Sonata, the company also displayed a hydrogen fuel cell electric vehicle (FCEV) concept car called Intrado and the subcompact i20 that was modified for the World Rally Championship.

It was the first time Hyundai has returned as a manufacturer in the rally since 2003.

At the motor show, the Korean automaker displayed other products, including the second-generation Genesis; the ix25, a small sport utility vehicle (SUV); and the Mistra, a premium compact positioned between the Elantra and Hybrid Sonata.

Kia Motors also introduced its new midsize Sorento at the motor show in hopes of grabbing a piece of the rapidly growing SUV market in China.

“Even in this tough Chinese market, we have been successful in our sales lately,” said a spokesman for Kia Motors. “We think the new Sorento will lead us to achieve even better performance.”

The company said the new Sorento will be sold in China with 2.0-liter turbo and 2.4-liter gasoline engines, and a 2.2-liter diesel. Its safety options include six air bags, a tire pressure monitoring system and an emergency stop signal system.

As part of plans to pursue the SUV market in China, the company also unveiled a small SUV concept car, the KX3, a model built to attract buyers in their 20s and 30s.

The KX3 is offered with three gasoline-powered engines - 1.6-liter turbo, 1.6 liter and 2.0 liter - and a seven-speed double clutch transmission for excellent driving performance.

It also has a series of safety and convenience options, including HID headlamps, a heated steering wheel and a panorama sunroof.

The motor show runs through Saturday.