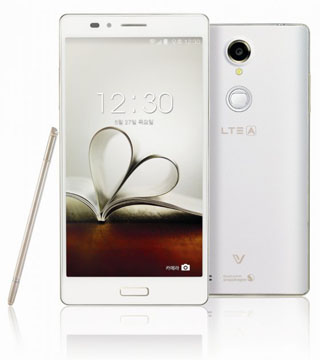 Pantech, which is currently under court receivership, introduced an inexpensive smartphone on Thursday as it waits for a new owner.

Korea’s third-largest phone maker said it released the Vega Pop-Up Note for the price of 352,000 won ($315). The phone is only available to SK Telecom subscribers.

“The price of the new phone is less than half of smartphones from other companies,” said Park Chang-jin, a marketing executive at Pantech. “With subsidies, customers can purchase this premium product within the 200,000 won range.”

Pantech said that the Vega Pop-Up Note, which comes in white and black, is the first mobile phone to have a touch pen that doubles as a DMB antenna. To make the stylus easier to remove, it can be “popped up” by pushing a button on the right side of the phone.

The new smartphone also has an antitheft feature for when users are charging the device in a public area. An alarm will go off if the user doesn’t enter the password in a set period of time after the phone is unplugged from the charger.

The phone also has a new feature that allows the owner to check whether a device that was temporarily lost was used by anyone during that time. If someone incorrectly guesses the unlock code or removes the USIM chip, the phone will automatically store that information.

Pantech originally planned to introduce the Vega Pop-Up Note in August, but it was delayed because of the company’s court receivership.

Industry insiders are watching to see whether the low-price Vega Pop-Up Note and a drop in the price of the Vega Iron 2 will help Pantech. If sales of the phones go well, the phone maker will be able to secure a stable revenue source.

Meanwhile, the bidding to acquire Pantech ends Friday. Although several companies in Korea and overseas filed a letter of intent (LOI) for the acquisition, it is still unknown whether any of them will make an actual bid. The preferred bidder is expected to be announced next week.

It was rumored that China’s Huawei and ZTE have filed LOIs, but the two have denied that they want to purchase the Korean phone maker.