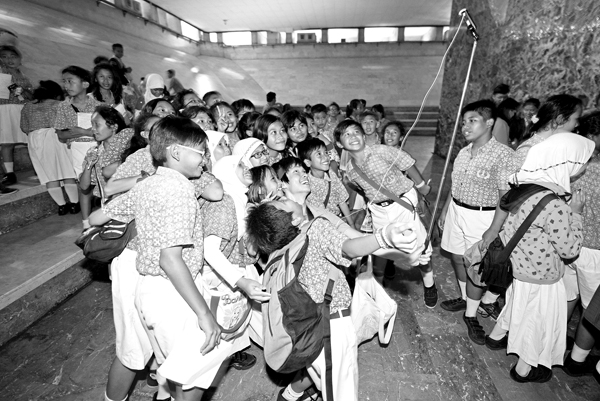 
DAEGU - A team of young explorers has successfully completed a voyage following in the footsteps of the pilgrimage route taken by Buddhist monk Hyecho along the 1,300-year-old maritime Silk Road.

North Gyeongsang formed the 150-member Maritime Silk Road Expedition Team in cooperation with the Ministry of Oceans and Fisheries and Korea Maritime and Ocean University. It departed from Gyeongju, the province’s capital city, on Sept. 16 and boarded the 6,600-ton Hanbada at the Port of Pohang.

The Venerable Hyeocho from Korea’s Silla era (57 BC-935 AD) is known as an explorer of the maritime Silk Road. He traveled to China’s Tang Dynasty in 719 to study esoteric Buddhism and in 723 embarked on a journey to India to learn more about the language and culture of the country that is considered the land of Buddha. 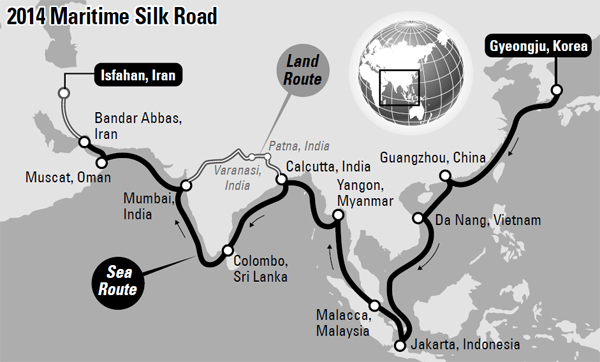 During his four-year journey across Asia, Hyeocho traveled to India’s five kingdoms, Central Asia and Arabia before returning to Xi’an, China. The journey is recorded in his famous travelogue, “Memoir of the Pilgrimage to the Five Kingdoms of India.”

“The eastern end of the ancient Silk Road was Gyeongju, not Xi’an of China,” said North Gyeongsang Gov. Kim Kwan-yong. “As trade increased, the maritime Silk Road extended to Gyeongju, and we wanted to let the world know about this.”

This marked the second time that North Gyeongsang has sent a travel team to the Silk Road. Last year, a group successfully journeyed from Gyeongju to Istanbul on a 60-day tour that went through seven countries over land.

Throughout the Silk Road journey, the North Gyeongsang team promoted Korea and its culture. In Guangzhou, China, it hosted an international academic symposium and presented the fact that the maritime Silk Road had once extended to Gyeongju.

In Vietnam, the team promoted the Korean Wave by hosting a performance. About 300 students of the University of Da Nang sang along to Korean pop songs at the event.

In India, the group performed “Nanta,” a popular percussion play, at the National Institute of Technology, Patna after opening a library named after the Venerable Hyecho. Hundreds of students danced along to it. The team also erected a monument to commemorate Hyeocho in Sarnath, India.

At the Silk Road’s western end in Iran, the members held an event to celebrate the anniversary of Gyeongsang’s first Silk Road expedition in front of the friendship monument. It was erected in Isfahan a year ago during the land team’s excursion.

The travelers also followed trails included in the Persian epic poem “Kush Nameh,” which is about the marriage of a Silla princess to a Persian prince. “As we followed the maritime Silk Road, we could feel the breath of our ancestors,” said Kim Ung-seo, a senior researcher at the Korea Institute of Ocean Science and Technology who went on the journey. “We also confirmed that the Silk Road is still the route of the Korean Wave.”

The province said it will invite delegates from the cities that its two expedition teams visited and launch a major festival to celebrate the Silk Road. The event will feature the various cuisines and handicrafts of the countries the team visited. The province will also sponsor the Silk Road Youth Network to promote exchanges among the university students of those nations.