Yudhoyono to chair the GGGI

Yudhoyono to chair the GGGI 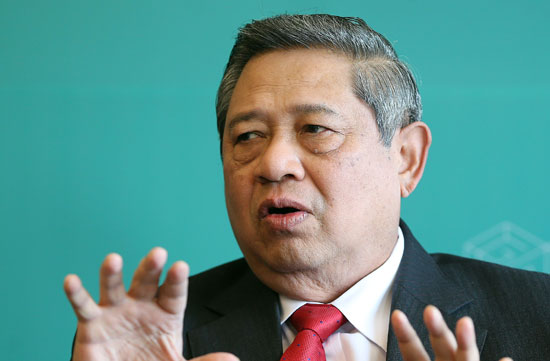 Former Indonesian President Susilo Bambang Yudhoyono was officially elected as the chair of the Council of the Global Green Growth Institute (GGGI) on Tuesday, according to the Ministry of Foreign Affairs.

The GGGI was established by the Korean government in 2010. It seeks the coexistence of economic growth and environmental sustainability, especially in developing countries.

It became an international organization when it was recognized by the United Nations Conference on Sustainable Development on June 20, 2012.

Yudhoyono was the first president to be directed elected into office and spent 10 years leading the nation. During this time, Yudhoyono built special ties with Korea under three presidents: Roh Moo-hyun, Lee Myung-bak and Park Geun-hye.

On Wednesday, President Park gave Yudhoyono the Grand Order of Mugunghwa, the highest medal given to a foreign leader, to show respect for how much he devoted his efforts to developing relations between the two countries.

Yudhoyono expressed his familiarity with President Park, referring to her as “my friend” in an interview with the JoongAng Ilbo on Wednesday.

He told the Korea JoongAng Daily’s sister newspaper that he is honored to be the chair of the GGGI for the next two years. He added that it is especially meaningful because the organization was established by South Korea, a developing country that is on track to become a developed nation.

“I remember when Korea had an initiative to establish this institution [GGGI] and then-president of Korea [Lee] asked for my support,” Yudhoyono said.

“I definitely supported the idea of establishing the GGGI, and since then, Indonesia has been a strong supporter.”

Yudhoyono said he will put his effort into increasing the number of GGGI members, using his familiarity with world leaders and the persuasive skills he nurtured during his long presidency. He also expressed a resolution to work on creating a firm foundation for GGGI’s funding.

The Indonesian government recently reviewed a plan to invest $5 million annually into the GGGI. The plan is awaiting the National Assembly’s approval, Yudhoyono said.

During the interview, Yudhoyono elaborated on his thoughts about the balance between environmental sustainability and economic growth. When he was first elected as president of Indonesia, he didn’t put much value on the environmental agenda, he said, which slowly changed over time.

“I know that the mission of all leaders is to stimulate economic growth. With economic growth, jobs can be created and the standard of people’s living can be improved,” he explained. “But after leading Indonesia for 10 years, I realized that environment should be preserved while economic growth is important.”

In 2005, Yudhoyono initiated the so-called triple-track strategy - a pro-growth, pro-job and pro-poor strategy. But two years later he realized the importance of the environment after hosting the UN conference on climate change in Bali, Indonesia.

The conference affected him so much that he added a pro-environment plan to the triple-track strategy, realizing that the three policies would help stimulate Indonesian economic growth but could destroy the environment.

“Since then I changed my mantra from triple-track strategy to a new agenda that added the pro-environment strategy,” he said.

While he was in office, Yudhoyono took on many programs to help preserve the environment. One was a campaign to plant trees, which he modeled on a Korean initiative of planting trees, he said.

The initiative was launched by the Korean government in 1962 in an effort to cover the land with trees, many of which were lost during the 1950-53 Korean War.

The JoongAng Ilbo spoke to Yudhoyono during his second day at the GGGI. He said his first day had been successful because he discussed a variety of ideas, strategies and how to make the organization more effective.

Yudhoyono also expressed encouragement to the new seventh president of Indonesia, Joko Widodo, who won the presidential election on July 24 and took office on Oct. 20. He said he has met Joko seven times and informed him about some important policies he wishes for him to continue.

“Every leader has his own style, and I have to respect it,” he said.

“But I do believe he will understand important things to be done or continued during his presidency.”

Yudhoyono and Widodo had a conflict over cutting fuel subsidies because Widodo suggested Yudhoyono should cut the subsidies, but Yudhoyono refused.