MB angry at ‘political’ attacks on his legacy

MB angry at ‘political’ attacks on his legacy 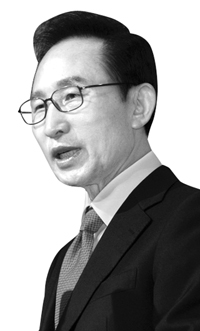 Former President Lee Myung-bak has defended the integrity of the legacy of his administration amidst intensifying pressure by politicians to launch National Assembly investigations into his river restoration projects and energy diplomacy.

“There is nothing to hide and I am proud of the projects,” associates of the former president quoted Lee as saying Thursday.

The main opposition New Politics Alliance for Democracy has demanded National Assembly probes into the signature projects of the previous administration.

According to a confidant who met with the former president last week, Lee complained about the recent debate in the political arena about his energy diplomacy.

“I did not divert money that was earmarked for energy diplomacy and spend it for other purposes,” Lee was quoted as saying. “To see the outcome of energy diplomacy, you have to wait five to 10 years.”

The former president, according to the source, was displeased that the opposition party was attacking his administration’s investments in overseas energy resources. He said such investments often require a long time to see returns and they are by definition risky. The opposition is attacking the projects with political intent, the source said.

On the four rivers restoration project, Lee said it was a successful program. “The people who actually live along the four major rivers and the heads of local governments in the areas, particularly the leaders of the Jeolla regions who are affiliated with the opposition party, actually judge the program positively,” Lee was quoted as saying. “But the opposition party is still making a political issue out of it.”

Lee compared the project with other landmark infrastructure programs of the past, according to another confident.

“In the past, there was strong resistance to building Gyeongbu Expressway and Incheon International Airport,” Lee was quoted as saying. “But they eventually received high praise.”

Associates of Lee said they are closely following the discussions at the National Assembly because the ruling Saenuri Party may strike a deal with the opposition party to allow a special investigation in return for other political gains.

The ruling and opposition parties failed to reach an agreement Tuesday over the budgets for river related projects. The key issue was whether the government has to pay 317 billion won ($283.7 million) in interest for debts of the Korea Water Resources Corporation incurred from the project.

After heated arguments, Representative Hong Moon-pyo, chairman of the budget committee, decided that the issue is “too sensitive” and “political,” and said he will not address it at his committee.

Some in the ruling Saenuri Party are now agreeing with the opposition party’s demand to hold a National Assembly probe into the project. “The government invested 24 trillion won and it has brought about environmental problems, so an investigation is necessary,” said Rhee In-je, a senior leader of the party.