Park invites some stars from Michelin to lunch

Park invites some stars from Michelin to lunch 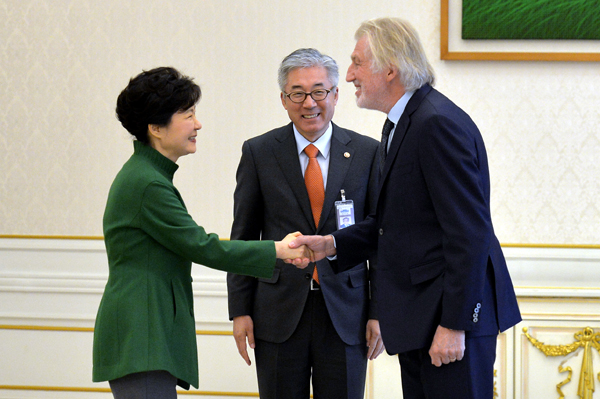 President Park Geun-hye shakes hands with Pierre Gagnaire, owner-chef of a Michelin-starred French restaurant in Seoul, ahead of a luncheon prepared by him at the Blue House on Thursday. The president, four Michelin-starred chefs (including Gagnaire) and a Korean cuisine expert discussed ways to globalize hansik, or Korean food. [NEWSIS]

President Park Geun-hye invited four Michelin-starred chefs to the Blue House on Thursday to talk about hansik, or Korean food, over lunch.

Yim’s fine-dining Korean restaurant in Tribeca, New York, was awarded two stars in the 2013 edition of the New York Michelin Guide, making him the first Korea-born restaurateur to receive a Michelin star. Jungsikdang, the precursor of Jungsik, is still in business in Cheongdam-dong, southern Seoul.

Ahn Jung-hyun, a Korean haute-cuisine specialist who has served as a menu consultant for important international banquets hosted by the Korean government, also joined the luncheon.

Gagnaire, who has restaurants in many world capitals, including Pierre Gagnaire a Seoul at the Lotte Hotel in central Seoul, prepared French cuisine from Korean ingredients for the luncheon.

Other guests included Kim Jong-deok, minister of culture, sports and tourism, and Kim Sang-rule, the new senior presidential secretary for education and culture.

Due to the different nationalities of the chefs, simultaneous interpretations of French, English, Spanish and Korean were used.

Saying she has always been interested in food, the president said Korea needs to foster Korean food into a new cultural industry that can appeal to the world. “I am asking you to give a lot of advice so that hansik could be globalized and loved further,” she said.

Park’s move reminded some of the much-touted efforts by the Lee Myung-bak administration to globalize Korean cuisine, a project that earned it harsh criticism for wasting a lot of government money.

The president sought wisdom from the chefs to “rediscover” the value of Korea’s food culture and to have Korean cuisine better represented on the global stage. Both the president and the chefs devoted a big part of their conversation to fermented sauces such as doenjang (bean paste), gochujang (pepper paste), ganjang (soy sauce) and fermented food like kimchi.

Gagnaire had earlier reinterpreted Korean pastes to create pen shell carpaccio with doenjang and gochujang ice cream to be served at his six-year-old Seoul restaurant. Joan Roca developed bean paste pasta and mutton with doenjang and ganjang. Roca said during a visit to Seoul three years earlier at a Korean gourmet forum that the strong characteristics of Korean cuisine should give it a competitive edge in the global arena.