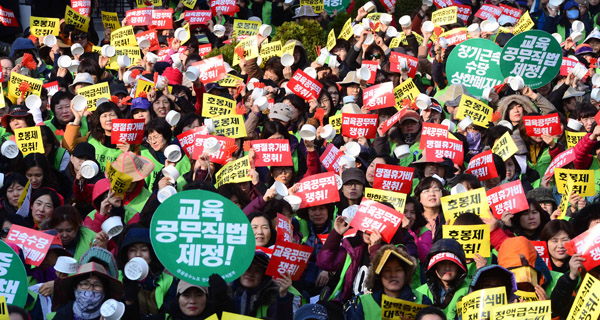 Members of a coalition of schools’ non-regular workers stage a rally in front of the Seoul Station on Thursday. The coalition, comprised of three labor unions of temporary employees working at schools, went on a two-day nationwide strike starting Thursday, demanding the educational authorities abolish discrimination between regular and non-regular workers. [NEWSIS]

More than 20,000 temporary workers at public schools and kindergartens across the nation went on a two-day strike Thursday, setting up a coalition of three labor unions representing non-salaried workers at schools.

The members of the coalition are demanding the end to discrimination between regular (or on staff) and non-regular workers.

Some schools are scrambling without the workers. Most of the 20,000 strikers work for school cafeterias.

In Seoul, 660 people from 149 schools joined the strike and 455 of them are working at school cafeterias. As a result, 84 schools in the capital had to prepare substitute meals or finish school routines earlier than usual.

“We had to tell students to bring lunch boxes today,” said a deputy principal of an elementary school in Seongbuk District, northeastern Seoul. “But children from impoverished families or double-income families can’t afford it or their parents aren’t able to make lunch for them.”

“Yesterday, I suddenly had to buy a lunch box that keeps the contents warm,” a 46-year-old parent said, “because I couldn’t let my child have a cold lunch.”

The Seoul Metropolitan Office of Education notified local schools of the strike and advised them to make alternate arrangements for preparing lunch or let children bring lunch boxes.

The authority also asked the schools to pay special attention to children from poorer families.

The situation wasn’t any better in other regions. In South Chungcheong, for example, 409 non-regular workers went on strike, putting a hold on lunches at 47 schools.

“We had no choice but to provide bread and drinks for lunch,” said Lee Heung-ro, deputy principal of Seatbyeol Elementary School in Cheongju. “The budget for lunches is only 1,800 won [$1.6] per student, so we couldn’t prepare full meals for them.”

The Incheon Metropolitan Office of Education said 259 non-staff employees at 46 schools joined the strike and 36 of them will not be able to provide lunches.

Cafeteria workers accounted for 214 of the strikers.

The coalition of school temporary workers is demanding local education offices and the education ministry pay fixed amounts of money per student for workers; keep paying wages during vacations; abolish limitation on long-service allowance; and adopt a system of graduated salary increases for them.

“The two-day strike until tomorrow is a warning to the authorities,” said an official of the coalition. “If the Ministry of Education and education offices do not come up with proper measures, we will prepare ourselves for a general strike.”

On the first day of the strike Thursday, union members staged a rally in front of Seoul Station in central Seoul and marched to Hanbit Sqaure near the Cheonggye Stream.

They are planning to stage another rally in front of the Seoul Metropolitan Office of Education on Friday with about 2,000 members.

Their demands appear to be too much for local education offices.

“They should talk to the Ministry of Education or National Assembly about it, instead of local education offices with their limited budgets,” said an official of the Seoul Metropolitan Office of Education.