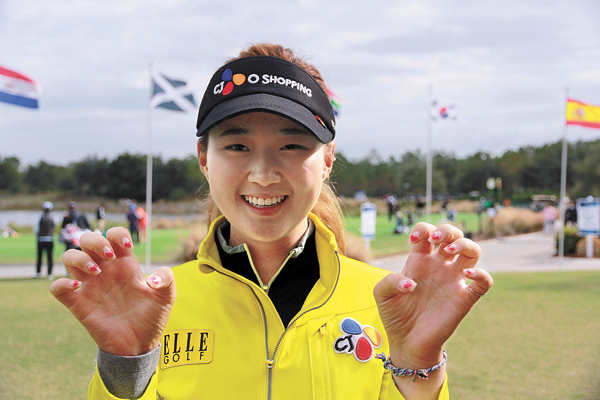 KLPGA Rookie of the Year Baek Kyu-jung, who won four tournaments this year, has joined the LPGA Tour for the first time.

At the CME Group Tour Championship in Florida - the final LPGA tournament of the year - she was in 50th place after the third round on Saturday, local time, with a 7-over 223.

Though the results are less than compelling, the experience will be a firm foundation for her first full year on the LPGA Tour in 2015.

Baek qualified for the CME Tour Championship and next year’s LPGA Tour by winning the LPGA KEB-HanaBank Championship in Incheon last month.

“I’m surprised, because I was welcomed not just by Korean golfers but also Brittany Lincocome, who lost [the KEB-HanaBank Championship] to me in a playoff,” said Baek last Wednesday before the start of the tournament at Tiburon Golf Club. “The atmosphere here is a lot different than in Korea, where all the players are intensely competitive.”

This year, the 19-year-old rookie was often in the center of controversy. Older Korean golfers would talk behind her back, saying she wasn’t behaving.

Such small controversies later grew so big that some golfers glanced suspiciously at Baek when her partner, Jang Ha-na, was disqualified from the KG-Edaily Ladies Open in May after making an error on her scorecard.

“I regret it so much,” said Baek, “because I admit that I should have been friendlier to other golfers. I think they misunderstood me, probably because I’m from Gyeongsang, where people talk bluntly, and also because I often had some wild friends.”

Some say she is an ill-mannered but outstanding golfer. Others say players try to bring her down because she plays so well.

In either case, Baek was the ugly duckling in a country of conformity.

Despite such controversies, she performed remarkably this year. Golf requires nerves of steel. When asked if she has them, she said, “I do get nervous, and I just try not to express it to others.”

Her next goal is to become the LPGA Rookie of the Year, which will require her to compete with other Korean golfers who will be advancing to the world’s premier tour.

Baek is already eligible for the LPGA along with another 19-year-old, Kim Hyo-joo. Kim Sei-young and Jang Ha-na have applied for the LPGA Tour Qualifying School, and Korean-Australian Lee Min-jee, 18, is also moving on to the LPGA Tour next year.

“Given that we are all neck and neck, Rookie of the Year will be determined by a small difference,” said Baek.

Regardless, she is taking another step toward achieving her dream of becoming a world-famous golfer.

“I played golf looking up to Park Se-ri and Tiger Woods,” said Baek. “My dream is to become the female Tiger Woods.”

She isn’t a tiger yet, but she was tough and wild enough to spend a year in the KLPGA Tour, where there are strict junior-senior relationships.

Baek is now entering a bigger jungle called the LPGA.