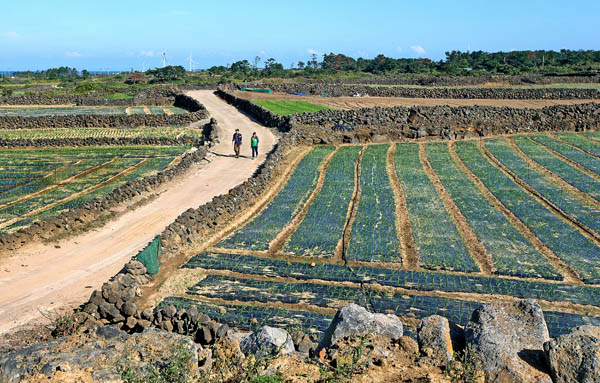 JEJU - The walking paths on this volcanic resort island have attracted travelers in search of natural beauty and serenity. But while the famous Olle routes offer trekkers natural wonders to empty their thoughts and minds, the three recently developed “geotrails” emphasize the importance of engaging in geologic exploration and developing an interest in the stories of the surroundings along the way.

Jeju’s newest geotrail opened to the public late last month in the neighboring Gimnyeong and Woljeong villages. The area is visited less by tourists compared to other locales on the island, but its geological features and the history and culture of its human settlements are attractive, according to the Jeju Tourism Organization, which developed the new trails.

“Geological features are the prototype of everything about the area,” said Oh Chang-hyeon, director of the Convergence Strategy Department at the Jeju Tourism Organization.

“Villagers here live on top of caves - the lava tubes. So it’s difficult to farm on this island. It’s barren land. But the villagers still tried to farm to make a living by breaking the bille, which means ‘a flat and rocky expanse’ in the Jeju dialect. It’s a very difficult process breaking rocky ground, but by doing so they were able to secure some land for a farm.” 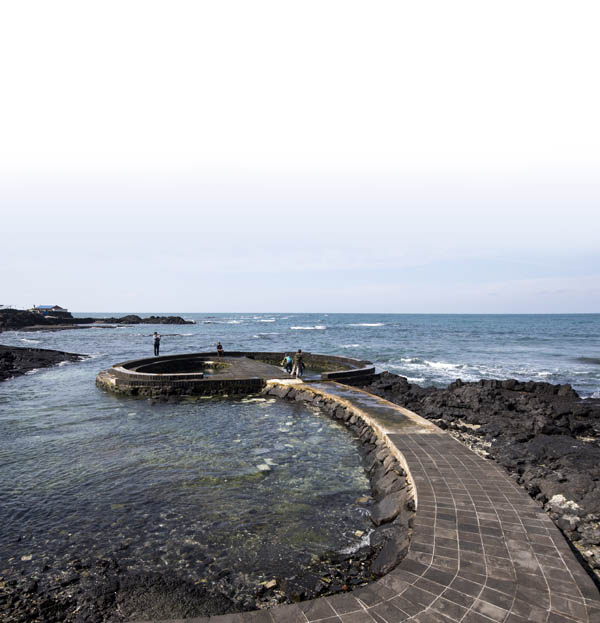 Cheonggulmul is a pool of fresh spring water that is known for its cold water even during the hot summer.

Despite the fact that farming is the main source of income for the two villages, only about 20 percent of the land in Gimnyeong and around 34 percent of Woljeong is arable. Altogether, only 24 square kilometers (9.3 square miles) can be farmed.

Yet the two villages were the first two places on Jeju Island where humans began to settle, Oh says, as they are close to clean shorelines and offer plenty of spring water.

“The two villages provide the perfect place to start the journey into the history of human settlement and lifestyle in Jeju,” said Oh.

In 2010, the island was included in the Global Geoparks Network, which is a Unesco-assisted project aimed at promoting and preserving geological heritage. There are 77 such geoparks in 24 countries across the world.

Nine sites on Jeju Island are designated in this category. 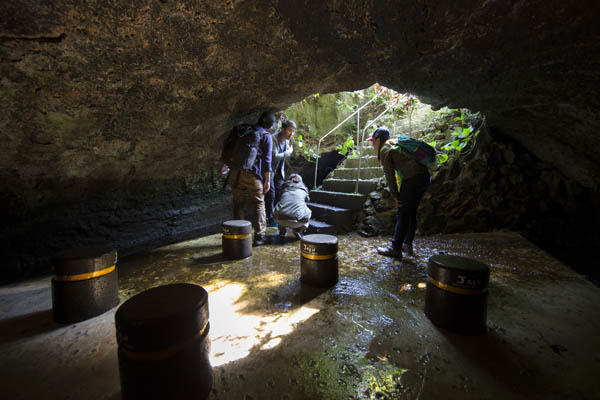 Unlike other programs - such as Unesco’s World Heritage or Man and the Biosphere Program, which strictly emphasizes the importance of “preservation” - the geoparks program stresses preservation as well as practical use.

According to the Jeju Tourism Organization, developing village projects such as the walking trails that are linked to Unesco’s geopark program is important because “villagers can participate and develop geological resources and generate profit that can be invested in preserving the geological resources.”

“It’s a local contact business,” said Oh, giving examples of other countries that successfully used the renowned Unesco Geopark recognition to launch business projects that have advanced the brand of the region and even increased the income of local residents.

Vulkaneifel Geopark in Germany, according to Oh, is also a volcano-themed park, which has 350 known eruption centers. As the area has much appeal, including its unique geological heritage, the country has developed geotourism and now draws in about two million visitors per year.

Among them, about 500,000 are said to stay for more than two or three days to experience the region’s geo programs.

Taking Vulkaneifel as an example, the Jeju Provincial Government developed its first geotrail in Jeju’s Suweolbong Tuff Ring area in 2010, right after it was designated as a geopark. The second was developed by the Jeju Tourism Organization and opened in April to cover the Sanbangsan Lava Dome and Yongmeori Tuff Ring Geosites.

The trail stretches 14.6 kilometers and can be divided into two courses. The first, called the Durubille-gil, which is a nine-kilometer path, passes through two villages.

The other, the five-kilometer Badangbille-gil, goes through a coastal walkway. Here, the words duru, badang and bille are seen, which are part of the Jeju dialect. Each word refers to field, sea and a flat and rocky expanse, respectively.

The Jeju Tourism Organization recommends that visitors experience the walking trail guided by the handbook it will provide, which will be available in four languages - Korean, English, Japanese and Chinese.

“It’s best to take the walk slowly as you enjoy the beautiful scenery, learn about the culture and life of the villagers, and explore the geological wonders of this region,” said Oh.

But for those who prefer listening to reading, Oh said villagers here also serve as narrators to “describe the geology, history, culture and even the latest local news and some gossip as well.”

Bille-wat is a bille, a flat and rocky expanse that villagers transformed into farmland by breaking up stones, which are often stacked to form a wall. Provided by the Jeju Tourism Organization

The narrator service has to be reserved in advance at www.jejugeopark.com by heading to the “sign up for narrator” section, or by calling the Gimnyeong Eoullim Center at (064) 782-9801, which is where the walk starts.

Unlike touristy areas such as Jeju’s Seogwipo, or the famous Seongsan Ilchulbong - known in English as Sunrise Peak - this is a quiet, rural village.

The spot used to be the location of Gimnyeong’s large harbor, but it’s difficult to find traces of it now because of the rise of development projects, such as the paving of the coastal road and the building of the breakwaters.

As soon as visitors start the trek, a lighthouse will grab their attention.

Jeju’s lighthouses are called Dodaebul. They are erected in each harbor, but come in various shapes.

Gimnyeong’s lighthouse used to be in the shape of a box, but when a typhoon in 1960 demolished it, a new cone-shaped construction was erected, which stands three meters high atop a hill called Maedongsan.

Gimnyeong Harbor used to be home to an important naval base in the early Joseon Dynasty (1392-1910), and this was where naval vessels were stationed. It was through this port, according to Oh, that tributes and gifts for the king were transported.

The old lighthouse formerly used fish oil or resin to light the fire, but in 1972, when the village began to use electricity, it handed its job over to a modern lighthouse. But the old lighthouse has been kept in tact as a symbol of the village’s old culture and lifestyle.

“The neighborhood offered topographic and geological features uniquely suited to the operation of numerous ports for specific purposes,” said Oh.

“Visitors can spend many minutes just listening or reading the history behind this port.”

One of Jeju’s most famous products is its bottled water, Samdasoo. Jeju boasts the highest rates of rainfall in Korea, and Gimnyeong is home to numerous sources of freshwater. Cheonggulmul, a bucket-shaped pool, is located right by the sea, and the road leading up to it makes it the best playground for children, according to Oh.

“Children just run up and jump into this bucket of freshwater and play all day. It’s still cold during the scorching summer,” said Oh. The bucket can be accessed when the tide is high. It then turns into a spring of freshwater in the middle of the sea when the tide begins to ebb.

But Oh said Cheonggulmul was not just a freshwater spring in the past.

“It was the water cooler for locals of the day, bringing people together and encouraging the exchange of news, including various family affairs and events, updates on the latest farming techniques, common concerns of the community and even wedding arrangements,” said Oh.

Cheonggulmul is connected to Geeutsaemmul, which is about 250 meters away, located in the middle of Gimnyeong Village. Visitors can walk down the staircase leading to Geeutsaemmul.

It is a lava tube that is made cool by cold water that springs from the ground. On the right-hand side, your head will be close to the tube’s brightly colored top.

According to Oh, before the waterworks were installed, about 200 families in the village depended on this spring for the water they needed daily.

About 1.3 kilometers from the start of the course, there’s a “healing point” where visitors can take a barefoot walk in the Health Bille Garden. It is filled with flat, smooth chunks of solidified lava.

“There are so much to see and experience about bille - the rocky expanse. But here will be the only spot where visitors can walk barefoot and feel the texture of the bille,” said Oh.

There are many more stories to tell and much more to see during the walk, says Oh, including how villagers managed to turn this rocky expanse into farmland, how the stone wall fences were built and what the famous “dotjae,” or the “pork ritual,” of the village is.

“It takes about three or four hours to finish the walk, but visitors can take as long as they want and be amused by the scenery and the history,” said Oh.

“The walk finishes at Woljeong Cafe Street where visitors can grab a nice cup of coffee, tea or juice in front of the beach and complete the day.”

The Gimnyeong-Woljeong Geo Trail provides directions on signs and with blue-and-red ribbons that look similar to those found on the Olle Trail.

The starting point - the Gimnyeong Eoullim Center - takes about 50 minutes to reach by car from Jeju International Airport and 90 minutes on bus No. 701.