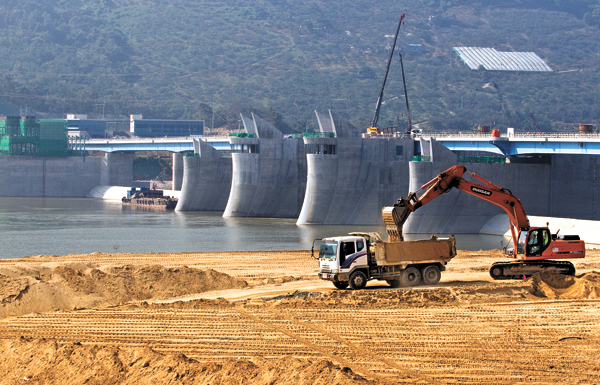 The construction site of Haman Reservoir at Changnyeong, South Gyeongsang, part of the controversial four-rivers restoration project carried out by the Lee Myung-bak administration. [JoongAng Ilbo]


Hyundai Engineering and Construction and other major builders are busy preparing bids for a $14 billion oil refinery project in Kuwait scheduled for early next year. But the companies recently received a letter from the project administrator asking them to explain the fines they received from the Korean government for collusion in the four-rivers restoration project. The restoration project targeted the Han, Nakdong, Geum and Yeongsan rivers and was led by the Lee Myung-bak administration, which invested 22 trillion won ($19.8 billion) from 2008 to 2013.

The 18 construction companies that participated in the project were fined a total of 111.5 billion won by the Fair Trade Commission in 2012 for collusion in bidding. They cross-checked and kept watch of one another to make sure no bidders revealed the decided-upon prices, according to the FTC.

“Since competition for overseas construction projects is getting tougher, foreign companies are talking about the punishments that Korean companies received in the four-rivers project everywhere,” said a spokesman for a construction company participating in the bidding for the Kuwait refinery project. “We worry about not winning any contracts.”

Some Korean construction companies are banned from participating in bidding within the country and are having a tough time abroad.

“I heard that foreign companies considering giving orders to Korean companies are trying to verify issues related to the four-rivers project through multiple channels,” said Kim Tae-yeop, a spokesman for the International Contractors Association of Korea (ICA).

And it doesn’t matter if the companies already have won a contract. One Korean contractor currently building a power plant in the United Arab Emirates was asked to explain what happened in the four-rivers bidding.

“After many companies were punished and fined for the suspected collusion attempts, more and more foreign competitors are blaming Korean companies everywhere,” said a construction company spokesman.

Even foreign media outlets such as The Wall Street Journal and Le Monde spotlighted the collusion among Korean companies in the four-rivers project. Industry insiders worry the country might not achieve its goal of winning more than $70 billion in contracts this year, and that next year might be worse.

“The scariest thing for Korean companies is that they might lose the credibility they have developed with foreign clients,” said Kim, the ICA spokesman. “It will eventually cause serious damage to the Korean economy, considering the amount of money they earn every year overseas.”

“Korean companies need to seek fair competition,” said Prof. Shim Gyo-un of the department of real estate at Konkuk University. “The government also should not give companies a hard time over violations, because it really will influence the country’s economy badly.”

For their part, the fined companies blame the government.

“We admit there were collusions, but what made us do that was the government,” said a construction company spokesman.

Looking inside every project where the government found violations, there are some common threads. All of the projects’ bidding was either turnkey, in which the builder is mainly in charge of finishing a project while the owner or operator has limited authority, or a low-bid system that forced companies to invest more.

The turnkey system, for instance, forces bidders to design costs - typically 3 percent to 4 percent of the total - up front. Design costs for each company can reach into the hundreds of billions of won for mammoth jobs like the four-rivers restoration, so only major companies can bid. Before the bidding started, the government also said it would not refund the design cost of the bidders that don’t win contracts.

And because the government wanted to finish the project before the president’s term ended, it placed orders for 15 separate project sectors simultaneously in June 2009 in the low-bid system. Under such circumstances, companies that were forced to invest big at a high risk checked with each other and decided on bid amounts.

“The government practically led the collusion at the time,” said a construction company spokesman. “And now they are driving us into a corner with a huge amount of fines and saying they will ban us from participating in future bidding. The worst thing is that we will be investigated by prosecutors and the police. This is too much.”

If the companies are criminally convicted of collusion, there is no way for them to make money from such projects. “The president [Lee Myung-bak, who was formerly a businessman before he stepped into the Blue House,] knew how to lower the cost of construction work too well,” said the spokesman. “I guarantee all the companies that participated in the four-rivers project suffered huge losses, and we can document how terrible it was.”

The four-rivers project wasn’t the only one in which contractors colluded.

In July, the FTC slapped a record fine of 435.5 billion won ($424 million) on 28 construction companies for collusion in bidding for a new high-speed railway between Seoul and the southwestern port city of Mokpo. On top of the largest-ever fine for a breach of fair competition in the construction sector, the antitrust agency said it would file criminal charges against accused companies and former and incumbent executives.

The bidding collusion included Hyundai, Daewoo, SK, GS, Samsung, Daelim and Hyundai Industrial Development and Construction. Employees from Daewoo, Daelim and Samsung cross-checked and kept watch of one another to make sure none of the bidders betrayed the agreed-upon prices. The 21 companies, including the big seven, each was able to get an equal portion of railway at the lowest bid price. Through such fraudulent means, they saved as much as 3.6 trillion won. The final construction cost went up, and the design and building processes are suspected of being poorly executed.

“The government needs to improve the current ordering system,” said Choi Min-soo, a researcher from the Construction Economy Research Institute of Korea.