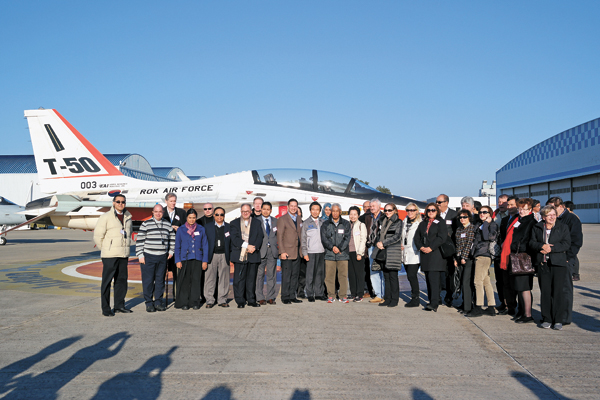 Ambassadors to Korea pose with KAI President Ha Sung-Yong, center, after a tour of Korea Aerospace Industries in South Gyeongsang to see the final production of an indigenously-built aircraft Tuesday, the T-50 training jet. The Ministry of Foreign Affairs hosted a two-day trip for the diplomatic corps to visit the southern coast of Korea. By Sarah Kim

A group of ambassadors from 48 countries, their spouses and Korean foreign affairs officials traveled last week to the most remote southern coast of the Korean Peninsula, or Namhae.

The two-day trip hosted by the Korean Ministry of Foreign Affairs to the provinces of South Jeolla and South Gyeongsang was an introduction to the region, located five hours by car from Seoul, and an opportunity to explore its riches culturally, technologically and ecologically.

The visitors walked through a vast field of golden reeds fluttering in the autumn breeze at Suncheon Bay Ecological Park, a coastal wetland in South Jeolla that serves as a repose for rare species of birds, animals and plants.

They were given a moment of tranquility overlooking the rising sun from Boriam Temple at the top of Mount Geum, or Gold Mountain, at the break of dawn.

And in a more contemporary vein, they viewed the assembly of state-of-the-art domestically built airplanes at Korea Aerospace Industries (KAI) in Sacheon, South Gyeongsang.

On Tuesday, the diplomatic corps toured KAI, the Korean aerospace company founded in 1999, including its final assembly building. They were accompanied by KAI’s multilingual engineers and saw firsthand the development process of indigenous aircraft such as the KT-1, T-50, FA-50 and multipurpose helicopter Surion.

“The basic trainer KT-1 is acknowledged in performance among international consumers such as Indonesia, Peru and Turkey,” KAI CEO and President Ha Sung-Yong told his visitors, “and we are in close communication with other prospective customers for exports.”

The supersonic advanced trainer T-50s have been purchased by countries such as Indonesia and Iraq.

“KAI is a showcase of how far the Republic of Korea has come in terms of defense and aerospace technology,” said Raul Hernandez, the ambassador of the Philippines, as he toured KAI. “My country signed a contract this year to purchase a full squadron of KAI’s FA-50 jets to support the Philippines Armed Forces. We look forward to taking delivery of the orders at the end of the year.”

In March, KAI signed a $420 million deal with the Philippines to export 16 FA-50 light combat aircraft to the Southeast Asian country.

“The development and commercialization of this modern aircraft broaden the affordable options for armed forces of emerging economies,” Hernandez added, “and makes our ally Korea into an even stronger defense partner.”

Ambassador of Turkey Hakan Okcal told the Korea JoongAng Daily after the tour, “I was impressed to learn that there are 1,800 engineers [at KAI].”

Turkey purchased the KT-1 training aircraft in 2007. “So now I have a personal good feeling about the institution,” Okcal said, “and also their products, seeing their manufacture.”

Okcal added, “We have a quite compatible defense industry to cooperate with the Korean side.”

“Since 1991, my ministry has been trying to provide members of the diplomatic corps with a broader picture of Korea beyond the metropolis by acquainting them to the provincial regions,” he said.

“This year, my deliberate choice was the southern coast,” he added. “After all, this area’s serene beauty makes it one of our nation’s hidden gems. But I really wanted to introduce my friends in the diplomatic corps to a place showing Korea’s past as well as a glimpse of its future.”

He said despite the southern coast’s historic significance, “this is also a region that points to the future. Korea Aerospace Industries … is a new bastion of cutting-edge technology nestled in the scenic Hallyeo National Park. Suncheon is a model for development in tune with the environment.”

Yun also updated the diplomatic corps on the results of a recent three-country trip by President Park Geun-hye to Beijing, Myanmar and the G-20 meeting in Australia. He added, “Next month, Busan will welcome the second Korea-Asean Commemorative Summit meeting.”

And in a rare moment of diplomatic musical harmony after dinner, Minister Yun joined a choir of foreign ambassadors to sing “I Have a Dream” by Swedish pop group ABBA.

The ambassadors actually have a formal choir that meets every Saturday to practice. It also performed “Longing for Mount Kumgang,” a South Korean song describing the yearning to see the mountain in North Korea, a symbol of unity on the Korean Peninsula.

On Wednesday, the diplomats visited the venue of the 2013 Suncheon Bay Garden Expo in South Jeolla, 564,000 square meters (139 acres) of themed gardens representing 11 countries including France, Germany, Turkey and Thailand. They also strolled through Suncheon Bay, Korea’s first coastal wetland registered under the Ramsar Convention, an international treaty for the conservation and sustainability of wetlands since 1996. It is home to 140 species of rare birds.

Mayor of Suncheon Cho Chung-hoon said, “We initially planned to invite the ambassadors of the 11 countries to visit Suncheon Bay Garden, but the response was so great that we are delighted to invite the whole diplomatic corps.”

French Ambassador Jerome Pasquier described the hike up to Boriam Temple Wednesday morning as the most memorable part of the visit.

“The view, especially the sunrise, was wonderful,” he said.

Mount Geum holds historic significance as the place where King Taejo prayed for 100 days before he founded the Joseon Dynasty in 1392. Many trekkers hike to the top at dawn to view the rising sun over the southern sea.

“Visiting KAI was also interesting and we could see the opportunity for Korea as an economic partner,” Pasquier said. He also highlighted the significance of meeting the governors of the South Jeolla and South Gyeongsang and other provincial and foreign affairs officials.

“Now I have a pile of work waiting for me,” said Pasquier with a chuckle, adding, “It was worth it.”

Philippine Ambassador Hernandez said his favorite part of the trip was the visit to KAI, even though it was a return visit. “I enjoyed looking at all those airplanes, the advanced airspace technology of Korea.

“I was there several days ago, and I was able to get into an FA-50. I was just amazed by the technology and how powerful the machine is, and how this could help in upgrading the minimum defense capabilities of the Philippines. That is why we tried to purchase a squadron of those airplanes.”

He also appreciated “the beautiful scenery that I have watched throughout the trip, especially the lake. It evokes some sentiments in my soul.”

For some ambassadors, the diplomatic corps trip was an introduction to the southern coast. For others, like Ambassador of South Africa Hilton Anthony Dennis, who completes his five-year tenure in Korea in less than three weeks, it was a memorable and heartfelt adieu to the country.

“This was an excellent opportunity to see an aspect of Korea we don’t usually get to see, a sort of rustic experience,” Dennis said. “I am always astonished how well the infrastructure is developed even in the most remote parts of Korea. You don’t see that in all countries.”