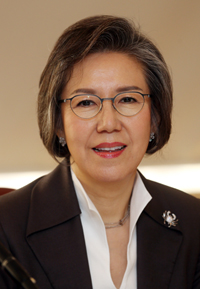 “I thought there could be no other hell,” said Lee Yang-hee, a UN special envoy on the human rights situation in Myanmar. Lee was describing her first visit to camps for internally displaced people in the country’s Rakhine State.

“During the wet season, the water floods up to the knees in the town,” Lee told the Korea JoongAng Daily during an interview on Friday at the Seoul Club in central Seoul.

“There were no water pipes, no bathrooms, and when it rained you couldn’t see five meters [16 feet] in front of you.”

Lee, a child psychology professor at Sungkyunkwan University, was named special rapporteur on the human rights situation of Myanmar by the UN Human Rights Council in May, the first Korean to be appointed to the position.

“In the dry season, they didn’t have water and many people lived in one room. They don’t have any freedom of movement,” she said.

“One boy I met was washing his hair with soap in rainwater … The children there didn’t have food rations, so the adults would starve and give their rations to the children.”

Lee first visited Myanmar from July 16 to 27 as a special rapporteur to the country. While there, she spoke with political prisoners in Yangon, visited IDP camps in Rakhine and Kachin states, and met with governmental leaders in Naypyidaw, the capital city.

She especially highlighted the plight of the Rohingya Muslim minority who live at the camps in Rakhine State in western Myanmar. An estimated one million Rohingya people are denied citizenship despite having lived in the nation for generations. They face constant persecution and discrimination.

“Almost 10 hours of the day was spent in transit, many times traveling in airplanes, boats, small six-passenger jets,” said Lee, describing her 10-day trip to some of the area’s most remote parts.

As rapporteur to Myanmar, Lee said her goal is to help the people there attain “basic freedom, for a person to live like a person.”

On Friday, Lee gave a report on the “Remaining Tasks for the Democratization of Myanmar” at a panel hosted by the Seoul Forum for International Affairs. The panel was attended by a dozen political leaders, academics and members of the media, including Lee Hong-koo, the chairman of the Seoul Forum and a former prime minister, and Lee In-ho, KBS board chairwoman and professor emeritus of history at Seoul National University.

“My task is to monitor and report on the overall human rights situation in Myanmar,” said Lee. “And my role has been expanded to also report to the council on the progress in the electoral process and reform leading up to the 2015 election.”

Lee especially warned of “backtracking” or “backsliding” by authorities in Myanmar, which could threaten the advances made in the past three years. She added that there is also a need for constitutional reform and a bolstering of the rule of law.

She also held a one-hour dialogue with Burmese opposition leader Aung San Suu Kyi, who she described as “still very beautiful and eloquent.”

Lee gave an oral report on her findings in Myanmar at the United Nations General Assembly in late October.

Lee, who earned her bachelor’s degree at Georgetown University and her doctorate at the University of Missouri-Columbia, has been a strong human rights advocate. She served previously as chair of the Committee on the Rights of the Child and chair of the Meeting of Chairpersons of Treaty Bodies.

She is expected to serve a six-year term as a special rapporteur.

“At that time, the Myanmar side expressed that they would like a Korean rapporteur, someone familiar with Asian culture,” she said regarding the selection process.

Her background in child psychology has also helped in her humanitarian activities.

“For example, I can help with capacity building,” Lee said.

Her new position has also been aided by her extensive background in children’s rights and familiarity with the situation in Myanmar.

“Our country has received a lot of help from the international community, so I think we have a responsibility to share our experience,” Lee said when asked what Koreans can do to help.

“We, too, in the past underwent war and colonization under Japanese rule and experienced military dictatorship, but at that time, the international community did not lose interest in us,” said Lee.

“We sacrificed a lot in our democratization process, and our civil society played a big role and has progressed a lot. Seeing that, the international community cannot lose interest in Myanmar and for that country, we need to continue giving aid to the country, not just economic aid but capacity building and international cooperation which can enable legal and legislative reforms and institutional policy changes to help them meet international standards and norms.”

She said such interest from the international community could encourage more people from Myanmar to become active in the country’s decision-making process, adding that it can help enable more minority voice to be heard.

“I think that is what principled democracy is all about,” she said.

Lee is set to return to Myanmar in January.