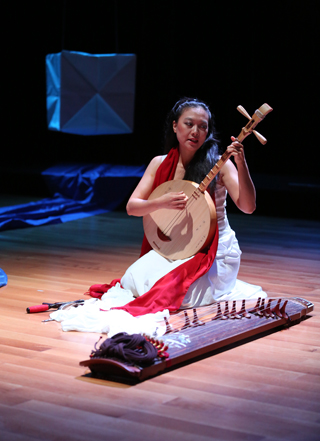 “Chant by Theresa Hak Kyung Cha” by Jen Shyu. Provided by the gallery

Theresa Hak-kyung Cha, a Korea-born American artist and novelist, was raped and murdered when she was 31 years old, just days after her critically acclaimed novel “Dictee” was published.

In her brief life, however, she held a show at the Whitney Museum of American Art in New York. She was just the second Korean-born artist to do so after Nam June Paik.

In an attempt to shed more light on the work and life of this rather elusive artist, the Suha Gallery in Gwangju is holding an exhibition dedicated to Cha.

Titled “Theresa Hak-kyung Cha Reference,” the exhibition is showing six videos the artist has made.

The films were in the hands of Bertrand Augst, a professor emeritus at UC Berkeley’s Department of Comparative Literature, where Cha studied. They include the 1975 work “Mouth to Mouth,” the 1978 piece “Passages/Paysages” and the 1976 work “Permutations.”

“Cha is a first-generation Korean-born artist in the area of experimental art,” said Kim Ji-ha, a curator, culture critic and writer, through a press release. “But because she mostly worked in the U.S. and her short life ended in a tragic death, few of her works are known in Korea.

“The most evident theme in her works is ‘historical consciousness.’”

Besides Cha’s work, pieces by six artists in the fields of visual art, performance art, film, theater and music are also on display at the exhibition. The artists, including visual artist Sujin Lee, film director Hwang Sun Sook and sound artist Jen Shyu, have incorporated work inspired by Cha.

According to research by Kimdaljin Art Research and Consulting in 2011, Cha ranked No. 1 as a “contemporary artist who needs re-examination the most.”