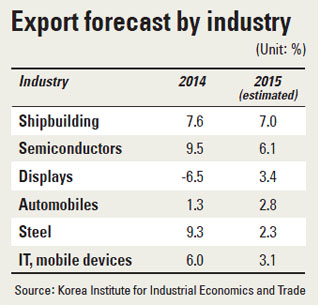 Korea is expected to see its gross domestic product grow by 3.7 percent in 2015, compared to the 3.5 percent forecast for this year, thanks mainly to stronger exports, according to a report Tuesday by the state-run Korea Institute for Industrial Economics and Trade (KIET).

The report estimates Korean exports will grow 4.5 percent next year and exceed $600 billion for the first time.

However, factors like the strengthening won, increasing overseas production by Korean businesses and the Korea-China free trade agreement (FTA) loom as threats to exports, the report warned.

Refining and automobiles are two industries expected to get hit if the Japanese yen weakens.

As for competition from China, most Korean manufacturing industries are projected to shrink, except for steel, semiconductors and automobiles, which were excluded from the Korea-China FTA.

By industry, exports of ships and semiconductors will grow most quickly, while steel, IT devices and refining are expected to see slow growth.

Shipbuilding is expected to see the highest rate of export growth at 7 percent, slightly lower than this year. Nevertheless, the report said the shipbuilders such as Hanjin Heavy Industries and Hyundai Mipo Dockyard are scheduled to send high-end offshore plants, liquefied natural gas (LNG) and container ships to foreign clients next year.

Semiconductor exports are estimated to grow 6.1 percent in 2015, a slowdown from the expected 9.5 percent growth this year. However, this still is a big jump at a time when overseas smartphone sales are slowing. The KIET report cited newly emerging business areas like wearable devices and electric cars as the main drivers of consumer demand.

The display industry is likely to see exports rebound to 3.4 percent next year from negative growth this year, the report added. Local display makers are expected to see exports decline 6.5 percent this year, mainly due to the flood of cheap display panels from China, but this trend is expected to flip with more demand for large ultra-high definition (UHD) and organic light-emitting diode (OLED) panels.

On the other hand, Korea’s longtime flagship exporters, steel and refining, are likely to face a slow year in 2015. Steel industry exports grew by 9.3 percent last year, but this is estimated to slow to 2.3 percent next year.

The report projected that Korean steelmakers will see demand rise from advanced economies, but it may face price competition from Chinese steel with the Korea-China free trade agreement.

The local refining industry’s exports are estimated to grow about 0.8 percent, about 0.5 percentage point lower than this year, mainly due to falling oil prices and price competition from Japanese gasoline and diesel.