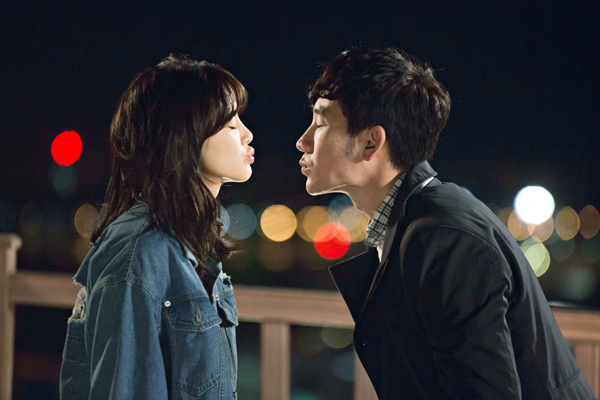 Lively girl Illi (Lee Si-young), left, weds Hee-tae (Uhm Tae-woong), her high school teacher whom she had a crush on years ago. However, while leading a happily married life, a new relationship shakes up her life and a love triangle ensues. Provided by CJ Entertainment

Korea’s drama fans should remember Kim Sam-soon, a pastry chef from the 2005 MBC drama “My Lovely Sam-soon,” which won the hearts of many viewers for its frank and humorous depiction of older, unmarried women in Korea.

Screenwriter Kim Do-woo, who was behind the drama, will once again introduce another beguiling character, Illi, the lead female in the upcoming tvN drama “Righteous Love” who gets caught up in a scandalous love triangle with her husband and another man.

Kim teamed up with drama producer Han Ji-seung from 2006’s “Alone in Love.” Han is known for his stylish visuals and delicate emotional portrayals.

The famed duo said that they wanted to tell a story about love, but one that people haven’t heard before. 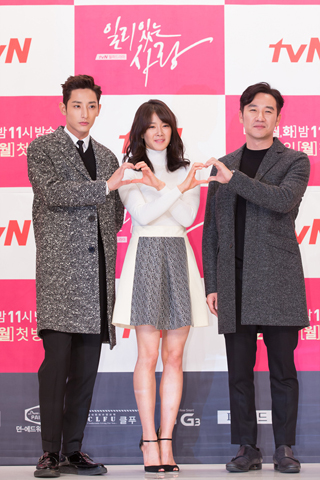 “I wanted to talk about an unconventional romance,” said Kim during a press conference for the drama at Times Square on Nov. 19 in Yeongdeungpo District.

“I didn’t consider my drama to be about unrighteous affairs but just wanted to offer something different to the viewers ... And then I thought if I gave a rom-com spin to the subject matter, it would be unlike any previous dramas.”

The synopsis roughly follows the coming-of-age story of the innocent and optimistic Illi (Lee Si-young), who marries her high school teacher Hee-tae (Uhm Tae-woong), whom she had crush on years ago.

Illi is confused by her attraction to both her loving husband and the charming young man.

Han, who has been searching for the right script for eight years, said “Righteous Love” caught his attention because it contained several opportunities to test his skills of dealing with sensitive subjects.

“I had to go through some challenges with this drama because if I didn’t do it perfectly, it was going to raise some ethical problems or else just be very boring,” said Han.

“With the ‘romance’ factor up front, I wanted to unravel the story behind it - about each and every ordinary life that people are carrying on every day.”

Actress Lee Si-young also said that the script’s strong romantic theme was what she liked the most about it.

“First of all, I liked it because it was a very strong and passionate story about love,” Lee said.

“Illi is a difficult character [to play] … I didn’t approach her in an immoral way but tried to focus only on her emotions. Even if it doesn’t involve marriage, I wanted people who had gone through a similar situation - being confused between two people - to sympathize with my character.”

Actor Uhm, who got married last year, said he shared many commonalities with Hee-tae, which helped him to relate to him more.

“I usually do a lot of research for my character, but for this one I didn’t have to,” the 40-year-old actor said.

“However, sometimes I felt really bad for him for being so reserved. But it’s not like I cannot understand him. Instead, I could feel from my heart what his emotions were and why he had to act that way.

“In the drama, there is not a single character that you cannot understand or sympathize with. It is a warm, and at the same time, heartbreaking story of love.”

The Monday to Tuesday drama will air its first episode on Dec. 1.