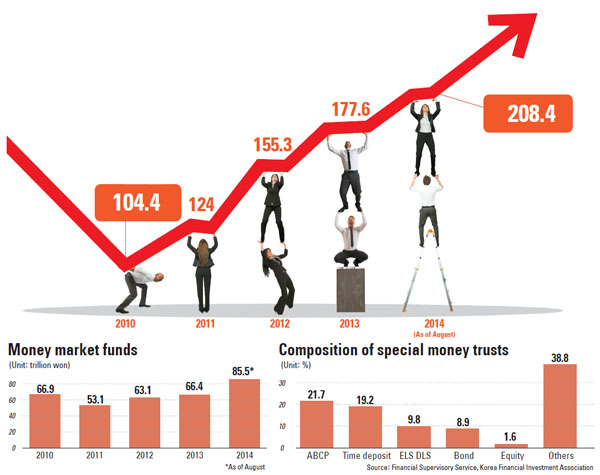 Cho, a 60-year-old homemaker, subscribed to a special trust at her bank last year. Cho used to put her assets in time deposits, but interest rates were too low, so she found alternatives. She deposited 200 million won ($180,000) in a special money trust that invests in asset-backed commercial paper (ABCP). Her bank recommended the product.

Another homemaker, Kang, 56, says she also put money in ABCP.

But recently, both Cho and Kang visited the consumer complaint office at the Financial Supervisory Service after they lost their money.

Consumers like Cho and Kang, who are disappointed in the low interest rates on time deposits, flock to short-term financial products with higher interest like money market funds (MMFs) and cash-management accounts (CMAs). Total MMF balances have surpassed 100 trillion won, while CMA balances increased to 44 trillion won. MMFs and CMAs are usually where people put large sums of money temporarily as they figure out where to invest.

One new temporary product is a special money trust. The total amount of money in special trusts stood at 208.4 trillion won as of August, compared to 104.4 trillion won in 2010.

Learning about special trusts helps consumers stay aware of the risks involved. They invest in a variety projects with a range of risk levels. Finding a special trust that fits one’s needs according to how much risk he or she is willing to take can replace less profitable time deposits, while reassuring consumers and paying higher interest.

Investing in a high-credit company’s corporate bond produces an average yield of 3 percent. ELS products offer 5 to 7 percent. ABCPs are the largest share of special trusts at 21.7 percent, followed by foreign-denominated products (19.2 percent) and ELS or DLS (9.8 percent).

Banks have been selling equity-linked trusts (ELTs) that are based on ELS. Individual customers get those products at banks rather than securities firms.

Recently, as consumers’ attention to the Chinese yuan soared, banks started to sell ABCP based on yuan-denominated deposits. Consumers tend to convert Korean won into Chinese yuan, which is expected to pay higher interest after a certain period of time, and put the yuan in deposit products.

However, consumers should be aware that special trusts are not protected by law, and it is possible to lose their money.

In the case of investing in foreign currencies, it is important to investigate the credibility of the country’s banks and currency risks.

When investing in ABCP, consumers should be cautious. ABCP is commercial paper issued based on real estate project financing, corporate bonds and time deposits of a special purpose company. Because this paper can attract money en masse, companies and banks can offer higher interest rates. But if the companies or banks get in trouble, it would be difficult to get back the original investment.

For example, KT ENS, an affiliate of the mobile carrier KT, issued ABCP through a SPC in order to raise capital for its photovoltaic business. It attracted a total of 101 billion won by using special money trusts.

Financial companies recommended the product for consumers, saying it was safe unless KT collapses.

But in February, KT ENS and its subcontracted workers were found in collusion involving about 300 billion won in illegal loans. Afterward, KT ENS went into court receivership, and was unable to pay for the ABCP.

Consumers should also be wary of CP issued by trust companies or their affiliates, or ELS products. When related companies go bankrupt, no one has an obligation to pay.

“Special money trusts are good wrapping paper,” said Gong Sung-yool, head of private banking at KB Kookmin Bank in Mok-dong. “Inside the box, there can be risky ELS or bonds, or less risky products. If consumers learn about the companies in which they want to invest, it would help lower risks while raising yields.”