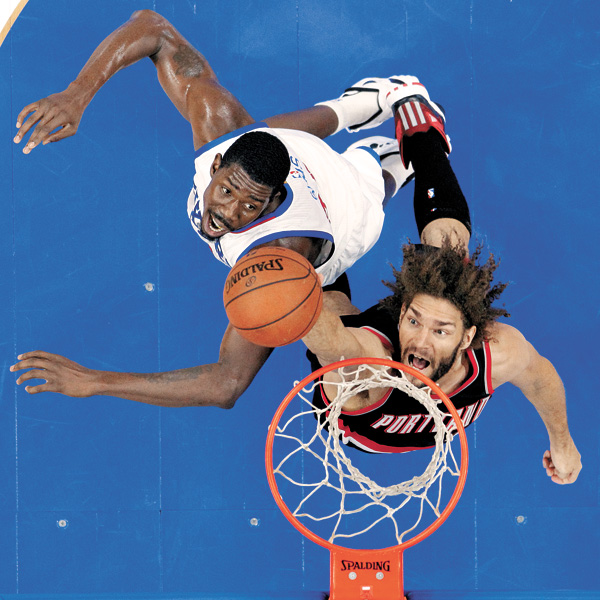 Robin Lopez of the Portland Trail Blazers, right, goes up for a shot against Henry Sims of the 76ers on Monday, local time, in Philadelphia. The 76ers were up by two at the half, but lost, 114-104, to stay winless for the season. [AP/NEWSIS]

The Portland Trail Blazers didn’t take the winless 76ers lightly after a lackluster first half.

LaMarcus Aldridge had 15 of his 33 points during the pivotal third quarter to help the Trail Blazers defeat Philadelphia, 114-104, on Monday night, local time, sending the 76ers to their 14th straight loss to open the season.

Wesley Matthews added 17 points, Damian Lillard had 16 and Robin Lopez chipped in 12 for Portland (11-3), which won its eighth in a row after trailing by two at the half.

“They came out with a lot of energy; we came out a little sluggish,’’ said Aldridge said. “They woke us up.’’

The 76ers moved to within one loss of matching the franchise mark for consecutive losses to begin a season and will look to avoid an 0-15 start when they host Brooklyn on Wednesday. They also are just four losses from tying the 2009-10 Nets, who set an NBA record by beginning the season 0-18. If the losing continues, Philadelphia could break the NBA record for losses to start the season on Dec. 5 when hosting Oklahoma City.

“Nobody is rolling over or pointing fingers,’’ said 76ers Coach Brett Brown. “This locker room is great. You go home and sleep OK. It wasn’t that bad. There were a lot of positives tonight.’’

After taking a halftime lead for just the fifth time this season, Philadelphia upped its two-point advantage to its biggest of the game when consecutive layups by Carter-Williams and Henry Sims made it 56-50 early in the third quarter. And Philadelphia’s lead again was six, 58-52, on Carter-Williams’ two free throws with 10:33 remaining in the period.

But it was all Portland from that point. The Blazers went in front on Aldridge’s drive that made it 63-62 with 8:10 left in the period and then continued to pour it on.

Nicolas Batum’s dunk with 4:02 remaining in the third gave Portland its largest lead to that point, 80-68, and capped a 6:31 stretch in which the Trail Blazers outscored Philadelphia 28-10.

“The biggest lesson is how hard you have to play to win,’’ Portland Coach Terry Stotts said. “Every night is a challenge. To be able to come back against a team playing with desperation means a lot.’’

Aldridge had three straight baskets during the run, including an alley-oop dunk on Steve Blake’s pass. Aldridge was 5 for 5 from the field in the period to help Portland enter the fourth with an 89-80 lead. Aldridge ended 13 for 20 from the field.

A pair of Carter-Williams free throws with 6.6 seconds left before intermission gave Philadelphia a 52-50 halftime lead. Wroten led Philadelphia with 10 points at the break.

The Trail Blazers also helped Philadelphia with 14 first-half turnovers, but they committed just three in the second half.