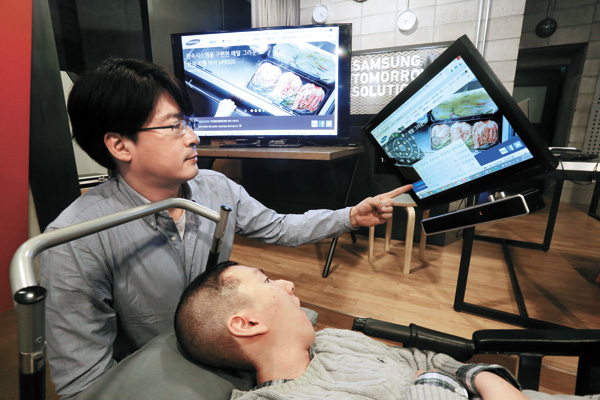 Shin Hyung-jin, right, a computer science graduate student at Yonsei University who played a key role in the development of Eyecan+, demonstrates the device at Samsung Electronics’ headquarters on Tuesday. Provided by the company

A cursor on a computer monitor followed a user’s eye movements. After a quick stare followed by a couple of blinks, the cursor double-clicked on a file and opened it. The cursor scrolled up and down the document. By reading eye motions, the mouse can also type reports or stream videos.

The user doesn’t need to be equipped with eyewear connected to the computer; he or she just needs to be within about 60 centimeters (23 inches) of the screen.

Samsung Electronics on Tuesday introduced its new Eyecan+, an idea that came from employees in the in-house start-up program Creative Lab, or C-Lab, started in 2011.

Samsung said in a statement that the second-generation eye-motion sensing computer mouse is targeted to help people with physical disabilities compose and edit documents and browse the web through simple blinks and stares.With a portable box connected to the computer or digital TV, the mouse also allows the user to choose the patterns of eye movements they want the device to recognize.

The user can then customize the program based on their preferences, such as how responsive the sensor is, and input 18 commands such as copy, paste, scroll and drag.

The Eyecan+ demonstration was conducted by one of its developers, Shin Hyung-jin, a computer science graduate student from Yonsei University who is also quadriplegic.

This is not the company’s first version of the eye-motion controlled mouse. A previous edition was introduced in March 2012. Shin collaborated with C-Lab in its development in 2011 and played a key role in creating the upgraded version, which is more sensitive to movements and has more functions. The upgrade took 17 months to complete.

“Eyecan+ is the result of a voluntary project initiated by our engineers, and reflects their passion and commitment to engage more people in our community,” said Cho Si-jeong, Samsung Electronics’ vice president of community relations.

The device is not the first computer that can be operated by eyes, but it is the cheapest. Other versions cost about 10 million won ($9,000), but the Samsung version costs roughly 50,000 won.

The Korean tech giant said it has no immediate intention to commercialize the technology. Instead, it said it plans to manufacture a limited quantity that will be donated to charity.

The company also said it will make the technology open source in order to help other developers add to Eyecan+.