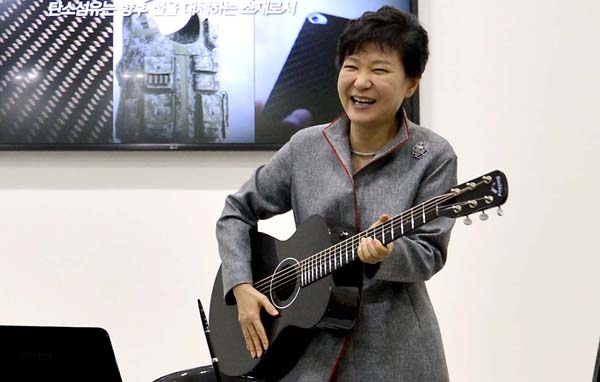 President Park Geun-hye plays a guitar made out of carbon fiber during her visit to Hyosung’s Jeonbuk Creative Economy and Innovation Center in Jeonju, North Jeolla, on Monday. [Joint Press Corps]

Hyosung Group is joining the Park Geun-hye administration’s plan to promote a “creative economy,” as the nation’s 25th-largest conglomerate along with North Jeolla opened an innovation center on Monday.

The Jeonbuk Creative Economy and Innovation Center in Jeonju, North Jeolla, is the third center opened this year in collaboration with conglomerates. The first one opened in September in Daegu with support from Samsung Group and the second opened in Daejeon in October with SK Group’s backing.

The creative economy has been President Park’s signature policy that aims to transform innovative ideas to actual R&D efforts and business ventures. While the policy has been criticized as vague, the Park administration has been establishing innovation centers to dispel that notion. The government plans to establish 17 centers nationwide with major companies in mentorship roles. For North Jeolla, the government aims to make the region a hub for the carbon fiber industry.

“The Jeonbuk Creative Economy and Innovation Center that opens today should be a foothold for the realization of a creative economy that harmonizes traditional and future industry,” said Park in her congratulatory speech.

“In order for the carbon fiber industry, bioagriculture and traditional culture to make a leap, the center should be a link to address weaknesses.”

Park added that the Jeonbuk center, which will be called C’incu Space, will be the first to provide a “one-stop” service for start-ups and businesses seeking to expand, focusing on financial services.

As a conglomerate that will lead the effort to boost North Jeolla’s economy, Hyosung said it will invest a total of 1.24 trillion won ($1.11 billion). It will first inject 1.2 trillion won to expand its carbon fiber plant in Jeonju by 2020 in a bid to make the region a cluster of the carbon fiber industry. The investment will allow the company to produce 14,000 tons of carbon fiber a year by 2020, seven times the current capacity.

In 2011, Hyosung became the first Korean company to develop carbon fiber with its own technology.

In addition, the group will invest 40 billion won to foster SMEs and start-ups, and the North Jeolla government will contribute 5 billion won. It will mainly be used to create a fund and establish a start-up incubation center.

“Hyosung and North Jeolla have a plan to raise more than 100 SMEs in the carbon fiber business and make Korea’s carbon technology be a part of the global’s top three,” the company said in a release. “From carbon materials to parts to finished products, we will form a carbon-specialized cluster and aim to export $10 billion worth of carbon products by 2020.”

Although the region has been the rice bowl of Korea, North Jeolla said it has been worrying about producing “the rice of the future industry,” but with the government and Hyosung’s support, it welcomes the idea of being a carbon industry hub in Korea.

“The land size of North Jeolla is 8 percent of Korea, but the population is only 1.85 million, which is half of Busan,” said a North Jeolla official.

The center also will focus on combining technology and traditional culture, such as hanji (Korean traditional paper) crafting, and make it into new commercial product.

Meanwhile, starting from the Jeonju-based innovation center, the Ministry of Science, ICT and Future Planning said it will connect its entrepreneurship-fostering online community “Creative Economy Town” with the conglomerate-led regional innovation center.

The ministry aims to complete connecting the existing centers and upcoming 14 centers with the online community starting in the second half of 2015.

All business ideas and entrepreneurship assistance discussed and developed at the North Jeolla innovation center will be live-shared at the online creative economy community, and vice versa. This not only enables new entrepreneurs to find business partners and mentors outside the province, but also encourages conglomerates to participate in the online community to pick up useful ideas to commercialize.

The government says the interlocked system will benefit early-stage businesspeople both online and offline.